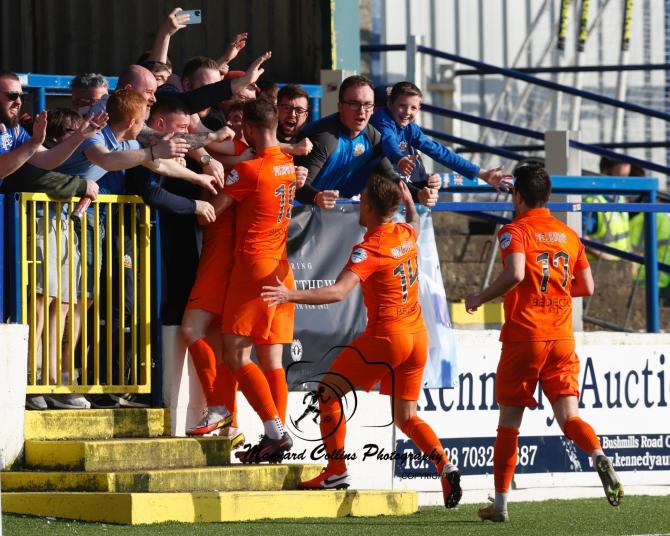 Glenavon celebrate scoring at the Coleraine Showgrounds when the teams last met in March.

Glenavon need to maintain their discipline and keep all of their players on the pitch if they are to get a result at Coleraine on Friday night.

That’s according to Gary Hamilton, who was speaking ahead of the meeting of the two sides at the Showgrounds (7.45pm).

While Coleraine have got off to a 100% start, Glenavon are still looking for their first win of the season.

They fought back on the opening day to get a point away to Ballymena United and were unfortunate not to get anything from last Saturday’s defeat to Larne, losing to a Ben Doherty goal from the penalty spot in the 96th minute.

However, there has been one common factor in both of those games – Glenavon finished both matches with nine men.

It means that Andrew Doyle and Eoin Bradley are joined on the suspensions list by Calum Birney and Jack Malone.

“Coleraine have started well, they’ve beaten Cliftonville and Portadown this season so it’s going to be tough,” Hamilton said.

“We never get an easy game against Coleraine and Friday night will be no different.

“We’ll have to come up with a plan because obviously we are without four players through suspension.

“If we put in the same effort that we did in the second half against Ballymena and all of the game against Larne then you always have a chance.

“But we need to get that effort and keep 11 men on the pitch as that would give us a better chance of winning games.”

Coleraine have failed to win in each of the last six meetings with the Lurgan Blues, with Glenavon winning the last two encounters.

The last time the teams met at the Showgrounds finished with both teams ending the game with 10 men.

Glenavon lost goalkeeper James Taylor to a straight red card for a headbutt, meaning Glenavon had to play out the last 15 minutes of the game with Matthew Fitzpatrick in goal. Adam Mullan was sent off in stoppage time for picking up two yellow cards.

Before Taylor’s sending off Glenavon had gone into a 3-0 lead thanks to goals from Peter Campbell, Fitzpatrick and Jack O’Mahoney, who is now with the Bannsiders.

Kirk McLaughlin and a Curtis Allen penalty gave the Bannsiders hope with goals on 75 and 83 minutes respectively, but it was Glenavon who went home happiest.