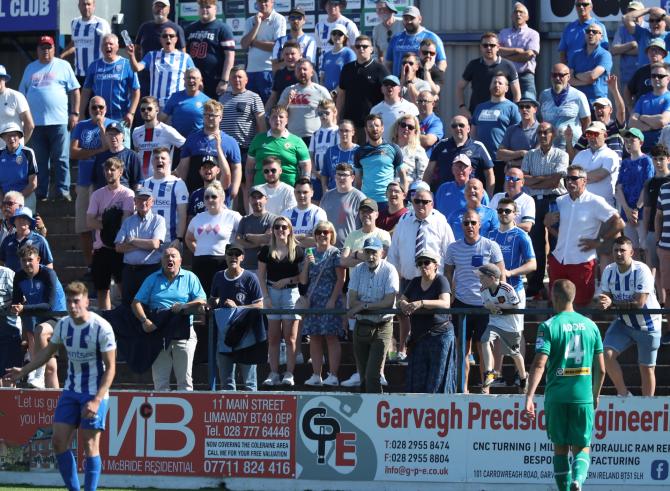 A healthy number of spectators have been to Irish League games this season. INPHO Brian Little.

The Northern Ireland Football League has confirmed that there has been a record attendance across their 'Weekend of Football' after the completion of three Sunday fixtures so far this campaign.

Over 42,000 fans have flocked through the turnstiles in the first five weeks of the season, as the NI Football League continues to grow and evolve, with the introduction of Sunday football playing a big part.

Gerard Lawlor, Chief Executive of the NI Football League stated, “We are delighted with the initial attendance figures, there remains a lot of factors in the success but one thing I strongly believe is, we can no longer grow the league with everyone playing on a Saturday afternoon at 3pm.

“We continue to encourage and support our member clubs to look at innovative ideas in how to increase crowds and make the league more attractive and accessible to new supporters, I commend the clubs who have taken action so far and have got positive rewards.”

The first of which was Linfield’s season opener against Portadown at Windsor Park on Sunday 14 August, which welcomed 2,806 fans to the game and was a 13% increase on the previous highest recorded attendance for that fixture, set in 2011.

The following Sunday (21 August), newly promoted Newry City hosted their first Sunday game of the Premiership season with great success against Linfield. The attendance of 2,029 was the highest ever officially recorded for a league game at the Newry Showgrounds.

Newry City manager Darren Mullen noted, “I would have no hesitation in recommending Sunday football. The atmosphere was fantastic and gave those fans not able to watch games on Friday night or Saturday an opportunity to support their team. We can see from other leagues how it works so hopefully we will see further Sunday games.”

The third of August’s successful trio of Sunday games was at the Loughview Leisure Arena where another fixture specific record crowd watched on the first big upsets of the season as Carrick Rangers defeated Linfield in front of 1,452 supporters.

John Hood, Vice-Chairman of Carrick Rangers said, “We were very pleased with how our first Sunday fixture went, there is no doubt that the beautiful weather and scoreline helped with the feel-good atmosphere among our supporters, and we hope that any neutrals who attended also enjoyed it and would plan to come back again on a regular basis.  We are certainly considering trying another Sunday fixture later on this season.”

The next Sunday action that fans can enjoy will be Cliftonville’s venture in the SPFL Trust Trophy against Queen’s Park on Sunday 26 September at Solitude.