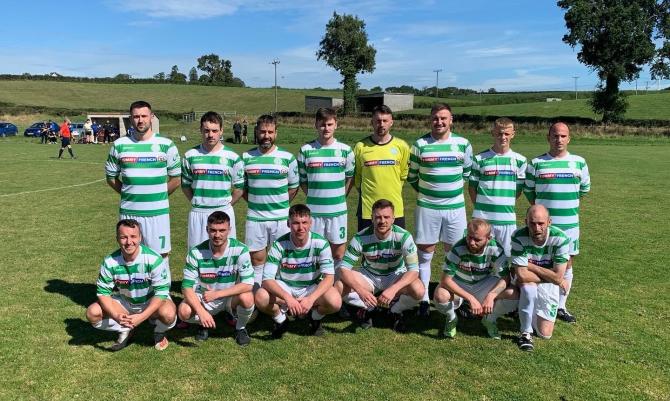 Lurgan Celtic boss Michael Smyth hopes that the quality in his squad will help compete for all available trophies – starting with tonight’s Gerald Kennedy Cup Final.

The Hoops face Newry Celtic in the decider at Holm Park this evening (KO 7:45pm).

The run to the final has seen Lurgan Celtic defeat two former holders of the competition as they bid to lift the trophy for a second time.

“I am quietly confident if my team performs as we can beat anyone,” Smyth said.

“However, we realise that Newry Celtic will be a hard test, albeit we don’t much about them.

“It’s important that we step up and perform tonight as we want to bring the Cup back to Lurgan for the first time since 2007 and only the second time in our history.

“Our run to the final started with Rossowen who we beat 6-1 moving onto a quarter-final clash versus Rathfriland Rangers Reserves - the current holders, who we beat 4-2 and then Ballyoran another past holder that we beat 3-1.”

Smyth hopes that winning a trophy so early in the season can be a springboard for further glory this campaign, with the club having a special affiliation with his family.

“It's great having a cup final and a potential trophy so early in the season,” he added.

“We know our league is our priority but our talented squad is more than capable of competing in all competitions we are in this season.

“Strangely enough once our first team reformed after folding, our first friendly was against Newry Celtic over two years ago.

“Both teams have changed a lot I'm sure since then, but I'm expecting a great game of football.

“They can score goals and I would imagine being one of the top teams in Newry they will play very good football, so tonight will be a good test for my lads.

“I have been in charge of the first team since it restarted, so over two or so years now. Previously I coached within the academy and growing up my dad was kitman/groundsman so my childhood was spent following Lurgan Celtic.”