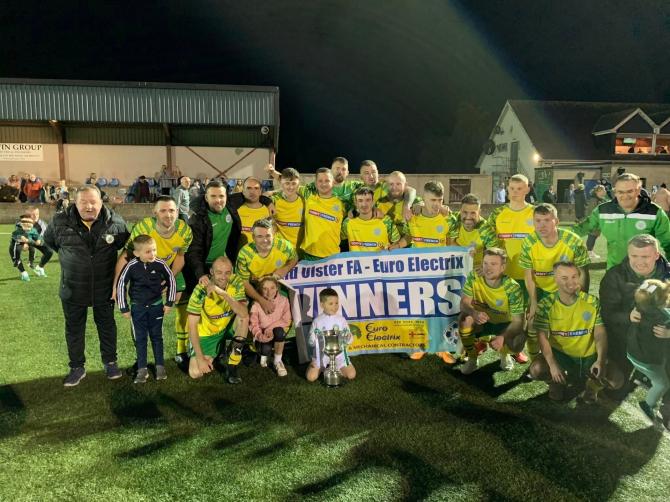 Lurgan Celtic have won the Gerald Kennedy Cup for the first time in 15 years after seeing off Newry Celtic.

The locals, who last won the competition in 2007, had beaten Rossowen, holders Rathfriland Rangers Reserves and Ballyoran en route to the final and were hopeful of adding to the John Magee Cup they won at the end of last season.

Their remarkable win came after they had fallen behind just before half time when they had been enjoying a decent spell in the game. Newry sprung the offside trap and after cutting in from the right wing, they pulled the ball back across goal. McGuigan initially blocked the shot but the follow up was dispatched confidently into the back of the net by Fegan.

The Lurgan men immediately responded, though, when a free kick was headed goalwards by Gilmore and landed at the feet of Reynolds, who lashed the ball high into the back of the net.

With the action in the opening period all but complete, another attack by Celtic, who now were getting their midfielders more involved and running at Newry's defence, saw Toman weave into the edge of the box and drawing the Newry defence to him, he slid the ball across goal where the potent Reynolds created space for himself to allow him to hook the ball into the net and leave the halftime scoreline reading 2-1 to Lurgan Celtic and making the half time team talk so much different from what it could have been only minutes earlier.

Whilst the Gerald Kennedy Cup was heading in the direction of Lurgan, huge credit must go to Newry Celtic who will feel that on another evening a few breaks of the ball their way could have saw them return home victorious and if they had retained the lead they took until half time then the game could so easily have been a different contest altogether.

Newry Celtic are without question a quality side, with fine players, a good setup and huge credit to them all for their respect at the final whistle, when having lost a final and hurting themselves they demonstrated great dignity in congratulating Lurgan Celtic.