Ref Seamus is still on the ball 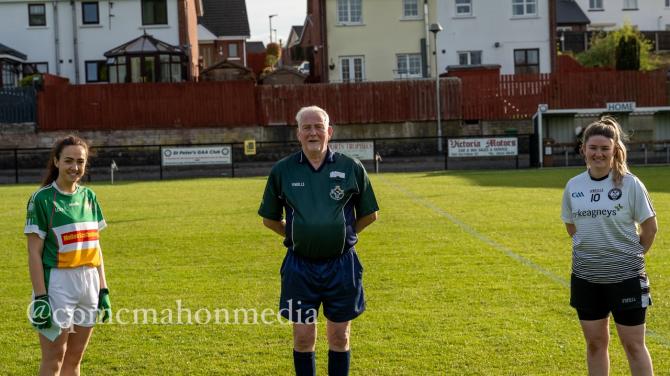 Seamus O'Neill with the St Paul's and St Peter's captains.

Well-known Lurgan referee Stephen Murray believes that Eire Og referee whistler Seamus O'Neill can't be matched when it comes to years spent between the white lines.
Covering every blade of grass in tonight's Armagh league ladies' opener between St Peter's and St Paul's, 'young' O'Neill was just "delighted" to get at it.
He said, "You don't always get a good night's sleep after the games with the aching joints, but I still love it and that's what keeps me going."
His fellow whistler, Stephen Murray, has thrown down the gauntlet.
"If Seamus hasn't given the most service to referring in the County I would like to know who has given more," said Stephen.
"He has been brilliant for possibly over 40 years. Maybe Barney Henry would know the answer, but it's great to see him in the thick of things."
With another season now in 'full blow', Seamus O'Neill can be spotted at a ground near you.