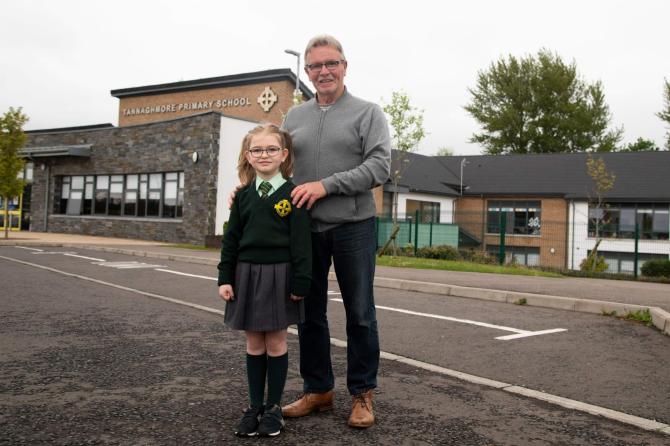 Standing outside a sparkling Tannaghmore Primary School in Lurgan, Gerard 'Speedy' Kane took a retrospective look back at a time when both Clann Eireann and Clan Na Gael were tops in Armagh football.

With his great-granddaughter Aoibh at his side, he turned his thoughts to the pending all-County under 15 clash between the north Armagh rivals.

“It is hard to believe that has been over 50 years since Clann Eireann and Clann Na Gael played in a County decider,” he said.

“It's like yesterday. One of our coaches on the day of the Juvenile final back in 1968 promised me two half-crowns if I scored a goal, I hit 2-04 which wasn't bad against a very good Clan's team.

“One half crown was produced and I was told I was owed the other one, but I was content with the win and my own personal tally.”

Gerard continued as his great granddaughter Aoibh, who plays for both Clann Eireann and Sean Treacy's hurling club, listened intently.

"Jerome McKenna, who went on to win Ulster championships with the Blues, was on that team. Mickey Polin was in nets, but when you have a player like Frankie Toman on your team you would fancy your chances.”

With school principal Mr Cleary providing the hospitality, 'Speedy' said the upcoming under 15 final could be a classic.

He remarked, "This is the biggest game involving two Lurgan clubs for years; with Clann Eireann having an extra game under their belts it's hard to know how things will pan out.”

The names still keep flooding back for Clann Eireann's goalscoring hero, who beamed, "When you win medals at an early age you always remember your team mates.

"When I look back I was privileged to be on the same team as Frank Toman.”

He added, “When you look at the work being done on the football front at both Tannaghmore and St Francis' Schools, who supplement the superb work at club level, its easy to understand why both teams are contesting the Armagh final.”

“On a personal note I would wish both teams well for the final - there are so many buzz words hanging around dressing rooms, but it's all about character.