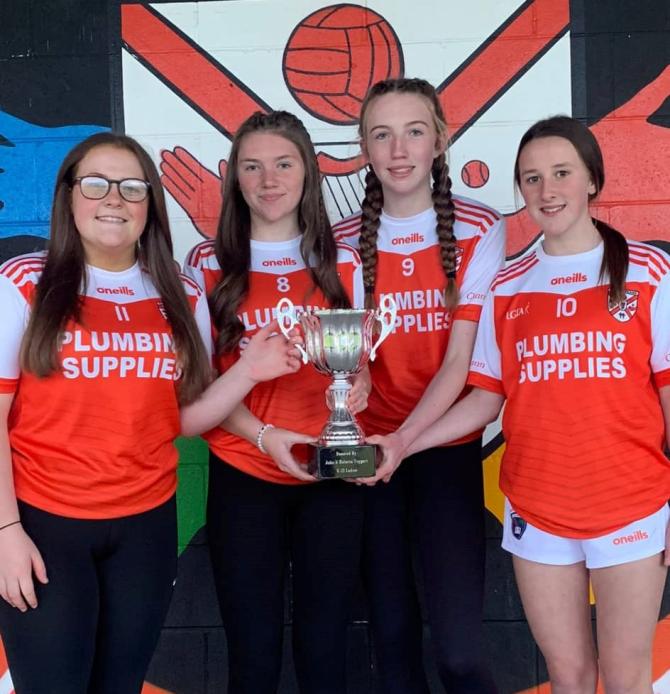 Clann Eireann ladies' senior side may have been disappointed this season when they were knocked out of the championship by eventual winners Armagh Harps, but as history would suggest the sterling work at youth level has produced yet another quality group of players at the Lurgan club.

Last weekend Clann Eireann's under 12.5 side made history by being the first team at this level to win three championship titles in a row. Let's have a look at how they reached a remarkable milestone, and who were the coaches who encouraged the side to glory.

Last weekend’s Championship win against Dromintee was the culmination of hard work and commitment shown by the Clann Eireann U12.5’s girls this season.

Twenty-nine players commenced this year’s training programme and in all types of weather, the girls under the guidance of Rory Haughian, Finbar McDonald, Kathy Magee and Declan Brophy turned up twice a week showing commitment, determination, and passion throughout to reap the rewards and ultimately lift the cup.

Working tirelessly on fitness and skill, but also incorporated lots of fun, laughter, friendship and Tik Toks, “stop talking” was a familiar instruction from the coaches!

The managers agreed early on that the aim of the season was to get every girl as much game time as possible and they succeeded in doing just that. Every girl played in matches in the North Armagh League, All County league, tournaments, friendlies and finally the Championship. In fact, all the girls played in the championship campaign and they only conceded one goal and seven points throughout.

Friendlies against St Brigid’s GAC and Gort na Mona GAC, Belfast gave the girls some tough competition during their preparation.

It wasn’t an easy road travelled; losing players temporarily to Covid and injury, and being without Mia O’Hara for a sustained period, but this didn’t stop these girls as they rallied each week to become a stronger unit.

It was clear from the league matches that Dromintee were the main threat and having beaten Clann Eireann by a point on home ground, on what turned out to be the league decider, it was inevitable that a meeting in the championship would be crucial.

The recent Championship winning team was made up of girls with a lot of experience coming from previous championship winning teams (under last year’s coaches Laura McAreavey, Gary McCafferty and Sheenagh Carroll) but there were also a lot of new faces to this level of football. In fact, a special word of congratulations should be given to Aoife McDonald (team captain), Cassie Henderson, Anna Lavery and Erin Melanophy, who have played in all three championship finals.

Saturday’s final in Mullabrack turned out to be electric. Despite some early scores from Dromintee up to the first water break, Clann Eireann then started to control the game. The girls put everything they had learned in training into practise and showed great skill and composure.

It was due to the commitment on the pitch from the girls and the guidance given by the coaches on the touchline and the unwavering support from family and friends including Marita. their Covid Co-ordinater, and Aoife, their head cheerleader, which spurred these girls on to this success to lift the Championship cup.

Clann Eireann believe there is something very special about this group of young girls, and the club are looking forward to watching them progress.