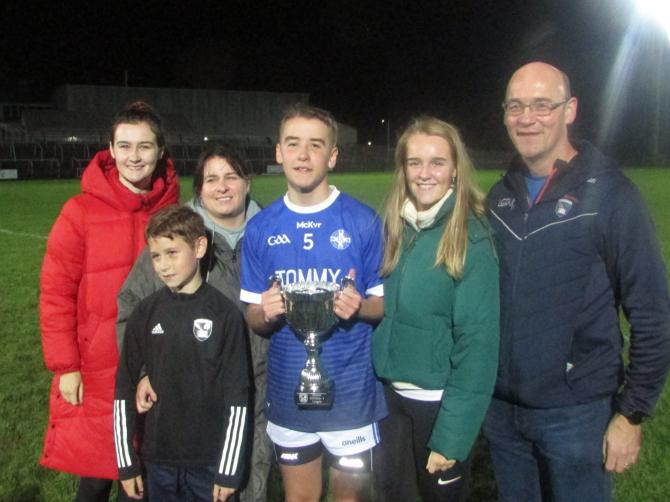 Sean Reid pictured with his family.

There is an old saying in Armagh football that you can be described as a good team when you beat Crossmaglen in a final.

That's exactly what Clan Na Gael's under 17 side did last night in the Armagh league final at Davitt Park.

The young Blues team not only put in a sterling performance but held Rangers to a single score in the second half, and could have hit at least six goals in the game, but the woodwork, a couple of goal line blocks and a well saved penalty kept just seven in it at the finish.

The winner's midfield pairing of Callum O'Neill and Shay McCann were sublime, the lad Toland at wing back looks to be a bit special while the two Lavery lads have come on a mile in a side where skipper Brendan O'Hagan supplemented the superb and brave Oisin Moore, the dashing mobility of James Austin and Calum McCrory, who put in some shift.

Cross had the talented full forward Odhran O'Neill ploughing a lone furrow up front, the most pleasing aspect of the Lurgan side's performance was their tacking and discipline which lasted from the first minute to the last.

Ronan McAlinden looks one for the future with great positional sense while Sean Reid looks to be a chip of the old block and marshalled a very tight defence.

In fairness this was a team performance from the Clans, who looked destined for some big achievements.