Clann Eireann boss Coleman: 'There are no trophies for winning semi-finals' 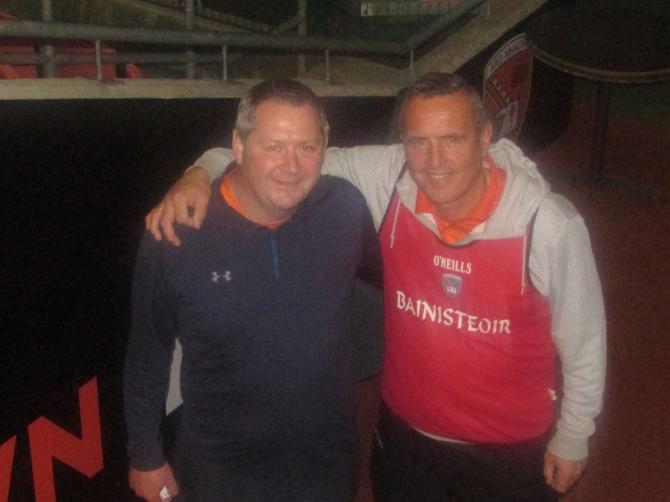 Clann Eireann manager Tommy Coleman has reminded his club's fans and players that "there are no trophies handed out for winning semi finals".

Speaking after his side had de throned championship holders Maghery, the former County player, who wears his heart on his sleeve, commented, "I feel absolutely exhausted after that.

"It was a tough game, it had no frills but that's the game we need to build character moving forward."

Backed on the touchline by Kevin O'Loan, Mark McCann and fellow Evertonian James Byrne (who follows two good teams)
Tommy Coleman will have a very difficult task irrespective of which side comes out of the semi final.

The Athletic Grounds fell eerily silent following the departure of the fans last night. Maghery, who had hit the front with an early and expected Brian Fox goal, just couldn't shake of the challengers who led at the start and most importantly at the finish, blasting over four of the last five points of the contest and introducing real quality in the youthful skills of Jack Conlon and Ruairi McDonald, who both scored.

Brendan Havern was absolutely brilliant for Maghery, but although his team spent a lot of time holding possession in the last quarter, they found it difficult to penetrate a defence brilliantly marshalled by the peerless Shay Heffron who looks as good as any of Kieran McGeeney's back six.

While the Lough Shore side owe their fans nothing having raised standards, there was a hunger from the winners which belittled indifferent league form. Are the Clann's ready to peak at an opportune moment?

The winners had a sprinkling of stars: Conor McConville has class, but it was the drive and ambition of Conan O'Carroll that singled the wing back out for special praise.

Stefan Forker had a lot of good touches, but an amount of composure missing in the corresponding fixture last season was the difference for the Lurgan outfit in the four added minutes.