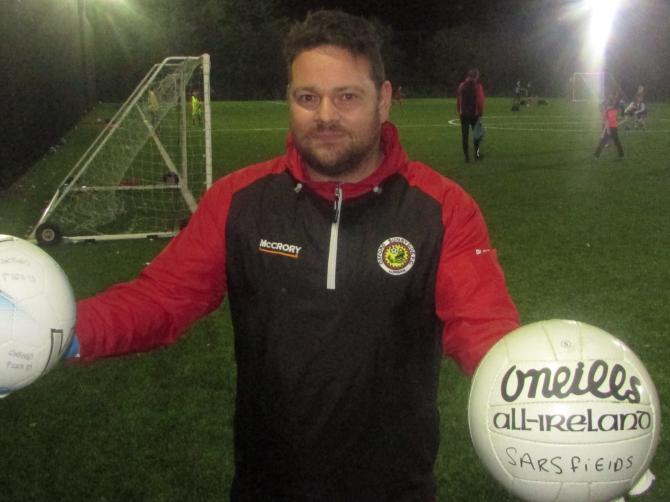 Having made his senior debut at just 16, Kieran McKerr has fantastic memories of playing with Clann Eireann as he attempts to keep a clean sheet each Saturday with Oxford Sunnyside.

Now 36, those days are still vivid, playing in winning Intermediate championship sides under the management of both Tommy Coleman and the late Kieran McGurk

The Oxford keeper believes the the Clann's can finally come good and move to the Armagh senior championship final.

The Lurgan side have a giant task in store at the Athletic Grounds on Sunday against Ballymacnab but considering they conquered champions Maghery in the last round, hopes are high that this year the side can reach maturity.

So let's hear what Kieran has to say about the Armagh semi-final and his years between the sticks at Clann Eireann.

Q How did your underage career go with the club?
A. At underage level I was fortunate to play in very successful team as I think only think we did not win was minor championship. At senior level I was lucky to win the double twice in intermediate championship and league and the newly formed 1B few years ago - unfortunately that would be my last medal for Clann Eireann!

Q Which managers do you remember the best ?
A, .The first manager if I can remember was Seamus McKavangh and Gary McCleary, but my first senior manager was Kieran McGurk and Tommy Coleman - these two men were absolute legends. I have some great memories with the lads.

Q. Do you miss playing for Clann Eireann?
A. I miss it of course, the buzz with the lads on championship days. There is no better feeling than putting on the club jersey anytime, but especially championship days gives you an unreal feeling, due to work commitments and family, commitments I was no longer able to give the time that is needed now to be involved.

Q. Could you handle the modern goalkeeping duties?
A. It’s a bit different from when I was playing in goals, I could not see myself running 50/60 yards downfield with the ball, but I do think it works as it sets up attacks and gives you a spare man and benefits teams in many ways. Although I think I would stick within the 21 yard line, to be honest.

Q. How do you rate the current Clann Eireann team?
A. I am very confident in this squad as a team that they can go all the way. The side is full of talented players and very committed players who are very athletic and with the coaches and managers who are currently on board there is no better time to deliver.

Q. Which of the current squad did you play with and who do you remember most?
A. I have played alongside Conor Bell, Ryan Henderson and Decky Leatham for many years and the commitment and dedication to the club is very impressive. The driving force behind the club for years is not only great footballers but great friends. The love for the game and passion for the club is unreal.
Playing alongside Mark Beatty was a fantastic experience. The man give absolutely everything for the club and the passion was unreal. If you could not get up for a game after Mark spoke, then there was something missing from your game. An absolute legend!