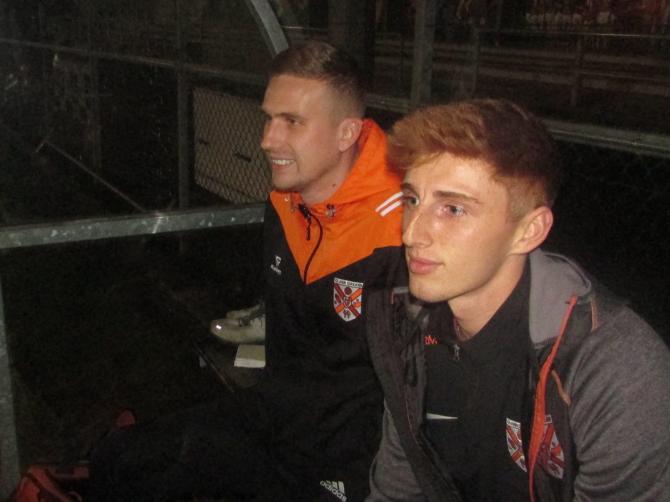 There are not many club sides in Armagh who could reach a championship semi-final without three of their top players.

At the Clann Eireann's training session tonight at Lake Street,both Johnny Tarode and Rioghan Meehan (pictured) could only look on in the knowledge that they can put their shoulder to the wheel again next season.

Add to the list former Armagh defender Ryan Owens, who will soon be receiving an operation for a long-standing injury, and the depth of the Clann's squad becomes evident.

Looking on from the dugout Johnny remarked, "It's frustrating being out long term, but we are delighted for the lads and we look forward to the time when we're in the thick of it again.”

With a championship semi with Ballymacnab pending, the classy defender added, "Ballymacnab are a very seasoned team.

“We had a good result against Maghery but it's all about consistency.

“To be honest we have young lads who can come off the bench to make an impact and the older heads still on board. There was always going to be a reaction when big Mark Beattie stepped down, he had such a presence on the field, but what we learned from him has stood by us.”

School boy star Rioghan Meehan, who lined out with players like Tierna Kelly on a treble winning St Ronan's side, commented, "It's not about feeling sorry for ourselves because we are injured, it's about working hard to get back.

“As you could see from our championship games, you need 21 players competing for places. All the lads who came off the bench played a big part. The managers have a lot to select from so that can only be good.”

The former St Ronan's player continued, "At the minute for me it's all about gym work but hopefully the running will start soon and then I will be on the home straight.

“It's always difficult sitting out a semi-final, but the bigger picture is about club success and taking one game at a time.”

This Sunday Clann Eireann play Ballymacnab in the Armagh championship semi-final. They hope to go one better than last season when they lost to eventual champions Maghery.