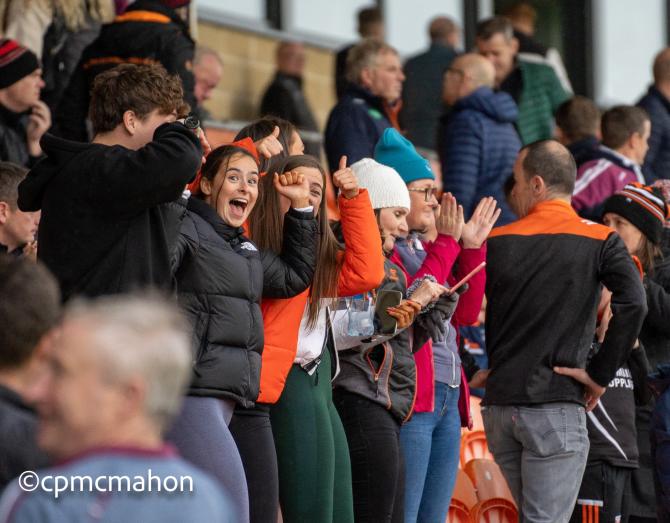 Two goals from Danny Magee and one from McCambridge himself set up a final decider against Crosmaglen on November 14, with a cool finish from Conor Turbitt in injury time providing a 2 points win.

It followed a Tiernan Kelly strike which had skimmed the crossbar after the striker had ended a 40 pass Nab move with a breakaway run.

It was understandable to witness a mini celebration on the final whistle - years of sterling youth work have borne fruit, but the Lurgan outfit will be left in no doubt by their management team that the biggest challenge is still ahead.

Rory Grugan was superb for the mid-Armagh side, Padraig Gribbon and Grugan with a brilliant strike on the quarter mark brought his team on level teams, but in a game where the winners lead until four minutes from time, and again at the end, the Nab took the initiative when they hit the front nearing the end of normal time.

The last three scores in character building fashion were two Tiernan Kelly strikes and Turbitt's sweet 45, which took a lot of composure with the end whistle pending.

At the back Shay Hefron shared the spoils with the impressive Jack Grugan, Declan Leathem was sublime - his mobility and vision were just bettered by McCambridge who was the outstanding player on the park.

The younger McCarthy, Daniel, was highly impressive, but mostly all of the shape of the side came from Ryan Henderson's movement with or without the ball. He probed, supported and played slide rule passes throughout.

With Tommy Coleman facing a scramble for starting places in the final line out, Conan O'Carroll and Adam Kelly are nailed on. They were superb in the win, while the wing back McCafferty who was introduced has a lot of class.

As for Ballymacnab, they are a quality side but have struggled to make a breakthrough. They fought back from a five point deficit, but looked a little jaded against young legs in time added on.

Crossmaglen await, the jubilation in the winners changing room, will soon wain and Tommy Coleman will ensure that the serious stuff is back centre stage at the next training session.