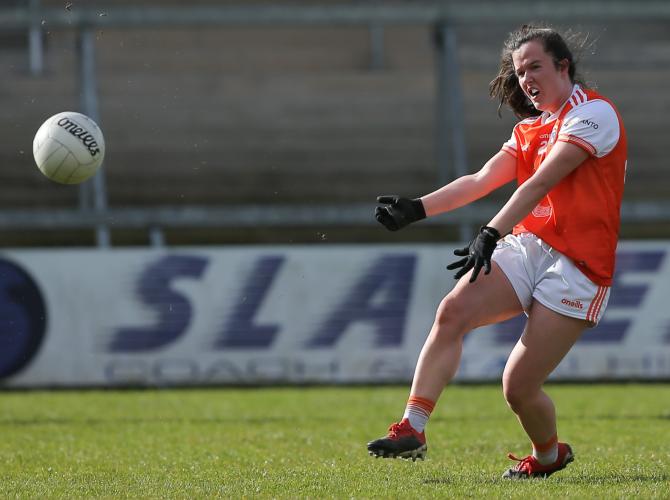 Chloe Magill has had the distinction of scoring an Armagh goal in the Athletic Grounds against a Meath team which would go on to be crowned All Ireland champions 18 months later, but the highlight of her career so far came much more recently in the same stadium.

Raising the first green flag of her county career against the Royals in March last year was a nice moment for Chloe, especially considering she hadn’t been an Armagh regular and isn’t a specialist forward.

However, the Orchard crew were well beaten in the NFL Division Two clash by a Meath team on the up and Magill hasn’t actually been back on the field in an orange jersey since then due to a combination of circumstances.

The first coronavirus shutdown came before Armagh’s next scheduled league game, Magill didn’t feature when the inter-county campaign resumed last autumn and, troubled by injury, she left the county panel in the early stages of the 2021 season.

So, she had to watch from outside the tent as Armagh retained their provincial crown in August but thankfully there has been a silver lining for the 24-year-old in the guise of a very rewarding season at club level with St Peter’s.

The north Lurgan team not only put the anguish of being pipped by Craobh Ciaran in last season’s Junior final behind them by defeating fellow Craigavon club Eire Og after extra-time but also secured the Division Four league title for good measure.

Now Magill has her own provincial campaign to look forward to, in club rather than county colours, with St Peter’s drawn away to Antrim representatives Glenavy on Saturday week in the Ulster Junior Club Championship quarter-finals.

“We were delighted with what was a historic success for us at adult level in Armagh, and that has hardly sunk in even now, but now we’re really looking forward to playing in Ulster and playing a competitive match outside our own county for the first time,” she says.

Magill was the sole representative of the Junior Championship in the Armagh squad at the start of this season and, as well as the valuable experience gained in that elite environment, she has also spread her wings with Queen’s University.

“I loved the uni football.  It was a great experience, playing in a different environment, with and against girls from other counties, working under different managers, going down the country for games and getting good exposure to a high standard of football.

“After my primary degree, I went back and did a Masters in Business Analytics and that last year we were beaten by UCC in the O’Connor Cup quarter-finals,” recalls Magill, who now works as a business analyst with Craigavon-based Almac.

“Whether through university or county, you always want to develop and improve as a footballer like in all aspects of life really, and I’d be one who would ask for feedback.  I think players can bring back benefits to their club environments from what we learn elsewhere.”

It was that hunger and ambition that motivated Magill to give county a go back in 2017 with St Peter’s clubmates at the time, Tiarna Grimes and Lauren Magee, and she enjoyed getting up close to her heroes.

“I loved it.  It was a privilege getting the opportunity to train with the likes of Caroline O’Hanlon, Sharon Reel, Marian McGuinness, Caoimhe and Sarah Marley, players who I had grown up watching and admiring.”

Now with Clann Eireann, Magill’s good friend Grimes has established herself as an Armagh regular over recent seasons, even winning the county Player of the Year award for 2019, and Chloe has enjoyed seeing her thrive in the orange jersey.

“Tiarna has really taken her chance and pushed on.  She works extremely hard and deserves everything she gets.  I’m delighted for her.  I was in Barcelona for a year but began getting a bit of gametime last spring before the pandemic came.

“I haven’t really thought about that goal against Meath for a long time.  I suppose I was in the right place at the right time.  Aoife McCoy gave me the ball and I just went for it.  It was a nice moment, especially in the Athletic Grounds, but we didn’t get the win we wanted.

“Even then, you could see Meath were a well-drilled team and very fit.  They just came at us in waves.  Their All Ireland win this season shows what can happen if a team does the basics right and works hard.  Their success can inspire other teams to push on.

“I was there at the start of this season but picked up an injury coming into the National League which required rehab and, after losing ground due to that, I decided to focus on club football.  It was a big decision but, thankfully, things have worked out well.

“Being involved with your county is a huge honour, I feel fortunate to have had the opportunity and maybe the chance can come again, but I’ve really enjoyed this season with St Peter’s and it has been very rewarding.

“When I was a child, I played for my family club, St Paul’s, but they had no girls football so I joined St Peter’s and have probably been playing for them at adult level for about 10 years now,” she explains.

“Last year’s (Armagh Junior) final was so close and we knew we could definitely have won it on another day but, having often fallen at the semi-final stage, it felt like a golden opportunity wasted but we just used the hurt to push us on to go one better this time.

“I remember back in the past when we’d have had maybe 7-8 players at training but this year we’ve had a panel of about 35, including a lot of young ones, and we get good numbers out three times a week.

“We got struck straight in again last autumn under the same management of Christy Furphy and Collie Gallagher, who have been with us for 3-4 years.  Division Four is the biggest section in the league so we were getting regular games and winning became a habit.

“I missed the only league game we lost, away to our main rivals Tir na nOg who were neck and neck with us the whole way through so the return match at our place was going to be pivotal and a fantastic crowd turned out for it on a Wednesday night.

“The crowd were well entertained by a high-scoring game (it finished 6-12 to 5-9) and, apart from making us favourites to win our league, that win was very important in terms of giving us momentum and belief.”

There seems to be a considerable buzz around ladies club football in the Lurgan area this year with Clann Eireann winning Division One, Clan na Gael taking the Division Three title and winning the Minor Championship and St Peter’s completing a double of their own.

Last year’s newcomers Wolfe Tones are finding their feet, Eire Og at one stage looked like they might be in a position to field two teams, St Paul’s are holding their own and although Sarsfields have been relegated again they haven’t folded.

“There’s a positive vibe around the local clubs with football for girls really taking off at the Tones and of course Eire Og, who hadn’t an active adult ladies side not too long ago.  It was good to see other new teams (Keady and Corrinshego) coming into the league this season.”

Even though they had gone well in the league, St Peter’s faced a challenging enough Junior Championship quarter-final away to Clonmore, who had reached the 2018 and 2019 deciders but lost to Mullabrack and Clan na Gael respectively.

“We knew we had the talent in the group to get back to the final and win it, but we knew from facing Clonmore in the semi-final last year that we’d be up against it there and it was a tight enough game.”

In normal circumstances, the Junior final would be a curtain-raiser to a bigger game but this time the Senior showpiece went first at the Athletic Grounds as Carrickcruppen’s men were also in Championship action later in the afternoon.

Because county champions Harps saw off the Cruppen challenge so efficiently, the main match didn’t really catch fire, whereas the Junior final which followed proved a full-blooded derby battle and a real edge-of-the-seat thriller which went to extra-time.

As in their last eight tie, Eire Og’s goal-scoring gave them the edge and looked like enough for victory but St Peter’s got back on even terms at the death and drove on to win in extra-time of what was a great game for the neutrals.

“It was nerve-wracking to play in, but looking back now when we won in the end, it was a great game to be part of.  We made hard work of it but fought hard to get the equaliser and take it to extra-time.

“I suppose what happened last year drove us on.  We didn’t want a repeat of last year and, fuelled by a mix of pride and adrenalin, we played more football in extra-time and I think we were worthy winners in the end.”

It’s often said that hard-earned victories which have been in real jeopardy feel sweeter than straightforward wins so a mix of that relief, exorcising the ghosts of being edged out by Craobh Ciaran the previous season and making history rendered this success so special.

“We hadn’t played much in normal time but played more like ourselves in extra-time.  Obviously, we’d have been delighted to win whatever way it happened, but having to do it the hard way made it even more exciting.

“The build-up had been lower-key than last season, when we’d maybe been sucked into the sense of occasion.  This year it was all about getting the job done on the field.  That said, I was more aware of the atmosphere this time, maybe the big stand makes the noise echo.

“Winning this Junior Championship naturally means an awful lot to everyone involved with the ladies side but the club as a whole have really embraced our success.  When we got back, we’d people waving flags and coming up and congratulating us.

“We went to see our Under 14s the following week and they were delighted to get pictures taken with the trophy.  Us winning gives the young girls something to look up to and they’ll hopefully push through in the years ahead.

“I’d say ladies football has become more valued in the club as the years have gone by.  Doing the double means we’ll be up a grade in each competition next season, but I think that we’re good enough to compete and am confident that we can consolidate that status.

“The other teams that have gone up in the past few years have held their own and Eire Og who we beat in the Junior Championship final are a Division Three team so I don’t think we’ll be out of place, but before then our full focus is on this Ulster Club campaign,” she insists.

Both in that provincial campaign and next season, Magill’s wider experience will make her a valuable voice and she’s also a versatile support player who works up and down the field whatever the number on her back.

“I definitely don’t know everything and am still learning all the time myself, but I’ve been fortunate enough to have experienced various set-ups and picked up plenty along the way so I certainly would try to help and encourage the younger ones,” reflects Chloe.