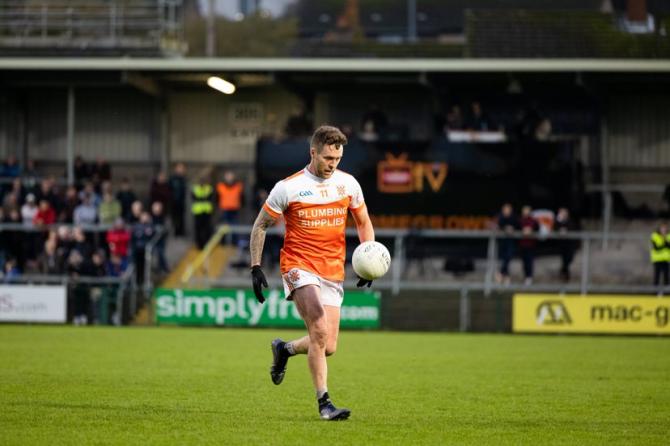 Having been hitting the net on a regular basis for Donegal Celtic, Henderson was snapped up by Jeffrey at Linfield - a time which he remembers well.

“David was superb with people - he understood them, and in many ways he reminds me of our Clann Eireann manager Tommy Coleman,” said Ryan.

“Tommy was out there during the build-up to the Armagh final which was great, it took the pressure off us, and it paid dividends.”

The Lurgan man said he loved his time in the Irish League.

"To be honest there wasn't a big lot happening with Armagh and Clann Eireann at the time when I moved to soccer,” he said. “I loved my time with both Donegal Celtic and at Windsor Park. There was a period when I was injured but when I was fit, I started.”

Looking to be a serious contender for an Armagh club all-star this year, 'Hendy' wouldn't be drawn about his future with the Shore Road side.

"I know that I was the first person Tommy (Coleman) phoned when he took over the team, but it's a bit early to be looking too far ahead at the minute,” he said.

“There is an Ulster championship to be contested. The managers have a lot of charisma and can be very persuasive so we will see what happens over the winter.

“Most players know when it is time to call it a day. There are a lot of young lads there looking to get jerseys so the older lads need to be well conditioned.

“At the minute though, it's just about enjoying our championship win.”

So what about getting back to the Mid Ulster League?

"I always liked playing soccer when Gaelic was in the closed season, both codes combined well for me. I would possibly play both or none.

“Looking back, apart from the odd injury I would owe a lot to big DJ and Tommy.

“They brought me to a new level both as a person and a player.”

Sounding very fresh after an almost teetotal weekend, Ryan Henderson is odds-on to return to the fold at the Shore Road. He hasn't said it yet, but it might only take a phone call.