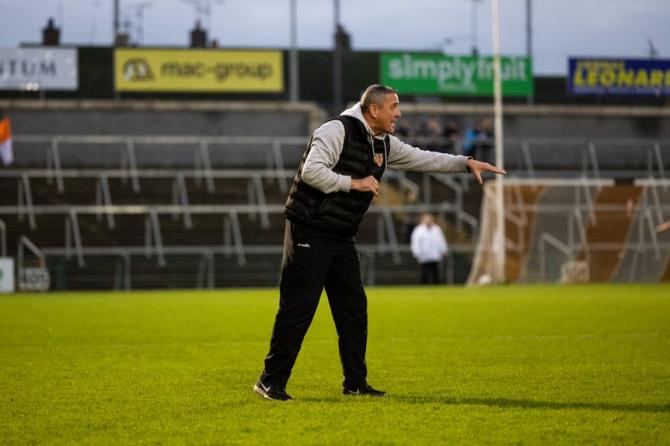 Former Armagh and current Harps keeper Patrick Morrison says that if Clann Eireann can park their title winning celebrations, they can sustain an Ulster challenge.

Speaking at Lurgan venue The Vintage as part of a talk night also involving Kieran Robinson and Michael Austin prior to the historic Gerry Fegan Cup win, Morrison predicted that the Lurgan side would need goals to beat Crossmaglen.

He said, "I always believed that Clann Eireann were going to have to hit the net to beat Cross, but I remember after the second water break saying that it was the only way back. The rest is history as they say."

The 2017 championship winner also suggested that his Harps side were so relieved at winning the series, having been close in previous years, that they over celebrated which resulted in a poor Ulster campaign.

"We were flat out celebrating after the win in the final against Maghery, and came back to training just before our Ulster game, which looking back may not have been great preparation," he explained.

Patrick stressed that if Clann Eireann can mimic the way Cross prepare for Ulster, they will do well in the series.

"You have to ask yourself how would Cross would have faced the game," he said.

"New teams can sometimes be content with their lot, but it would be my opinion that Tommy Coleman will be looking to sustain a long run in the series.

"You have to try and win it. People will look to Derry and Tyrone clubs as the benchmark, but when you look at what Kilcoo have done after a period off the pace in Down, then you can ask yourself has all the hard work with Clann Eireann already been done over a 20 year period at youth level.

"It can be sustained, particularly when you have that sort of quality coming through."

The Harps man, who is a top goalkeeping coach, stressed that there are "no easy games in Ulster".

"Clann Eireann have a few very experienced in their squad, which was crucial against Cross.

"Some of their finishing would suggest that their players have refined soccer touches in front of goals. They enjoy scoring goals, it's natural to them. Some players panic when they see the net, and these lads have brought a lot of youth success to the table.

"They play with abandonment; they could be around for many years to come on the big stage."