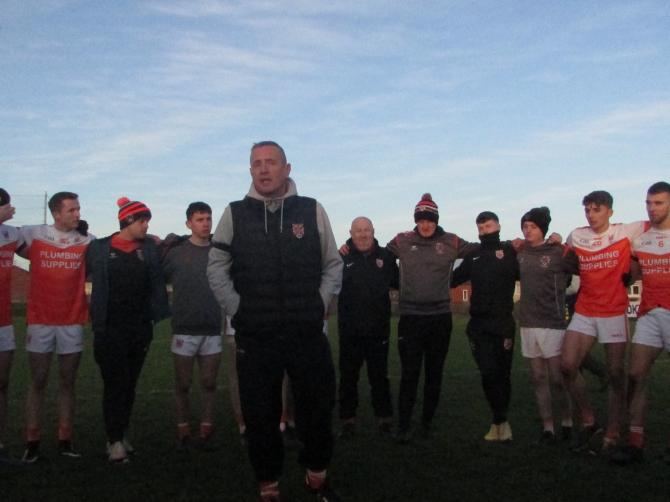 Lurgan side Clann Eireann stand one game away from an Ulster final appearance, having staged an epic comeback in Corrigan Park Belfast against Antrim champions Creggan.

The win sets up a fascinating tie with Derrygonelley in a fortnight.

Holding a three point lead at the end of a sublime extra time period, Tommy Coleman's outfit were well off the pace in the first half with only single points from Aodhan McConville and Danny Magee to show for a tentative and nervous opening 30.

Following the restart the Armagh champions became born again. They blasted home goals from super sub Ruairi McDonald and Magee who had a stormer, but the score of the contest was hit by Tiernan Kelly who crashed over an equalising point on the stroke of normal time.

The game was sublime. The opening period was all about the Antrim champions, the Clann's looked out of sorts lacking in ideas and unable to breakdown a dogged and determined Creggan rear-guard, but all the training and a good half time chat from the management at the first break seemed to do the trick to bring credence to the Lurgan side's challenge. Turbitt was making probing deliveries, and Magee was in superb form up front.

With Kevin Small, Paddy Coey, Mathew Rodgers and Ruairi McCann's accuracy telling for the Antrim side, Small's set pieces were keeping Clann Eireann at a distance and looking well out of sorts in the opening period.

Whatever about the attack, the winners going one to one in the latter stages changed the narrative, with McCambridge in superlative form. In front of Heffron, Leathem, McCarthy and O'Carroll were brilliant when required in the white heat of battle, but it was the drive and exuberance of wing back Adam Kelly which grabbed the headlines in a man of the match performance.

The winners were denied a third when Henderson, following a slick counter attack, was thwarted by Creggan keeper Kerr, and Jack Conlon elected to knock over an insurance point at the death.

The dream continues for the Lurgan side who are now one game from an Ulster final. Fitness, clever substitutions and a new found spirit brings a confidence for the semi-final.