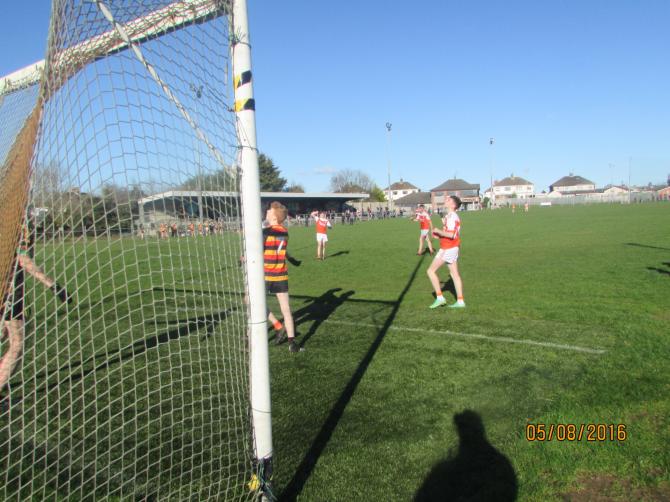 heading for the net, Dara Whitemarsh saw his effort dip under the bar.

Clann Eireann's unbeaten run, which stretched back to the start of last season, finished with an amount of drama today in Lurgan where they lost in "unusual" circumstances to a very game Cullyhanna side.

While the "official" angle on events registered a 0.11 to 2.07 win for the visitors, the referee misread a signal from one of the umpires which resulted in a Clanns goal in the second period going into the notebook as a point.

The ball, having dipped under the crossbar, deceived the young St Pats keeper, who in fairness had a great game.

The two sets of coaches had a long chat after the game with the officials, but the claims from the home side that the tie had ended in a draw - Cullyhanna 2.07 Clann Eireann 1.10, which would have signalled extra time - were not followed through and both sets of players left the pitch.

Although the Clann's looked all over the winners entering the break and leading by 0-05 to 0-01, Pat's were superb in the second half.

Despite looking a lot younger they battled gamely although the best player on the pitch, Clann Eireann's James McCoo, was causing them serious problems.

The home side were forced to play the last quarter with 14 players when a red card was introduced, but despite the controversy the game was entertaining even if the teams were a bit rusty.

Young Dara Whitmarsh will remember his goal for the home side, but on a day when the official scoreline stood, Clann Eireann's unbeaten run ended... well maybe!