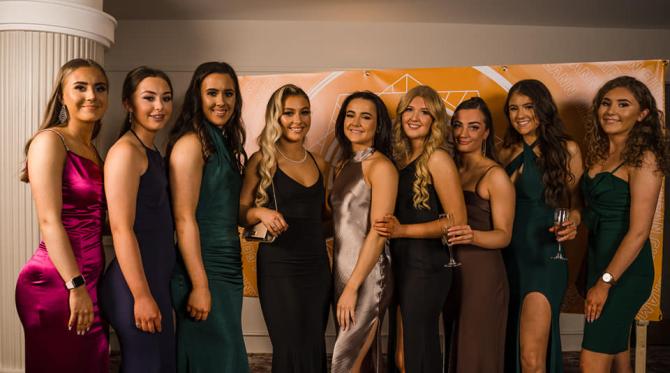 Despite winning 10 Armagh championship medals with her club Clann Eireann, along with two Ulster's and All Ireland medal with Armagh, Lurgan woman Laura Brown is buzzing about the new season.

Recently at the Seagoe she took a back seat during proceedings where the Clann's men's side took centre stage to celebrate a historic championship winning season.

However, the Shore Road ladies team (picture by Ciaran Mc Mahon) have also handed out their seasonal awards, and according to the former Orchard star, a bit more belief would be telling despite a dip in form.

Laura said, "The player are certainly there. We have been beaten in a few finals recently, but when you look at the young players coming through the system, like the girls who picked up awards at the dinner, then there is always the chance of getting back to the top in Armagh."

Laura, who won the player of the match in both an Ulster final and an All Ireland decider, now has a young family to look after, but there is always time for football. So how is pre-season going?

"When you're on the pitch, doing a bit of running there is always a niggle. You wonder why did I come back?" she said.

"But you miss the crack with the girls and the whole Clann Eireann family. Seeing Sinead Kernan (McCleary) back has boosted everybody.

"There is a vibrancy at the club with the younger players moving through to senior, and no doubt in the summer my fitness will improve."

Advising the younger generation, the Clann's legend said, "Ladies football is huge. Maybe it wasn't so big when I started to play.

"Some people would say that when we were winning games by 20 points that was a good thing. I don't agree.

"It great to see so many girls paying football and doing well at other clubs. Now at Clann Eireann, we have to fight for every league point, and every championship win. That's where we want to be, so it's down to us to return to the top, its in our own hands."