St Peter's off the mark as Tones miss chances 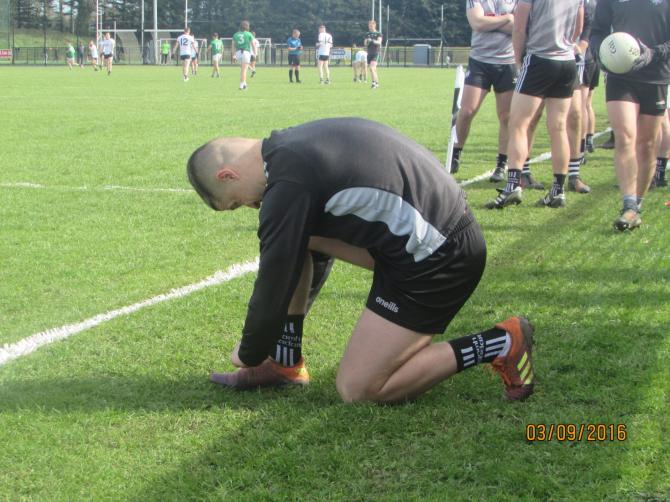 St Peter’s collected their first league points of the new season at home today where they entertained Wolfe Tones.

The visitors missed gilt-edged opportunities in the dying minutes with a series of wides proving crucial for the Derrymacash outfit.

In an apprehensive game, it was the Tones who showed most enthusiasm, bursting out of the blocks to take a 0-04 to 0-01 lead in the first quarter, mostly through the efforts of Paudie Judge.

But in fairness the Whites had a stronger bench, a little more composure in crucial moments and Niall McConville's influence (pictured getting ready for entry) when he was introduced near the end.

Niall Creaney had a good outing for the winners with new boy Barry Creaney impressing up front, but in the dying embers it was the craft and experience of Ciaran McCavigan and, in particular, Aaron Findon which was most telling.

The Whites’ James Moore is improving with every game, and although Johnny McCarron put a lot of work in for the Tones, the ’Cash side suffered with two black cards at crucial times.

Following an early skirmish and a couple of yellows, Emmett Haughian settled to give a top performance marking his consistency, with Robbie wearing number three steadying the defence.

Following the defeat it could be a tough year for the Tones. As for St Peters, their brimming bench looks strong enough to sustain a long campaign.

Team boss David Wilson has a lot of selection headaches in front of him, which is no bad thing in this division.

A big crowd witnessed a tense and untidy derby which had some decent passages. A couple of years in a higher division was enough to get the free crow side over the line.