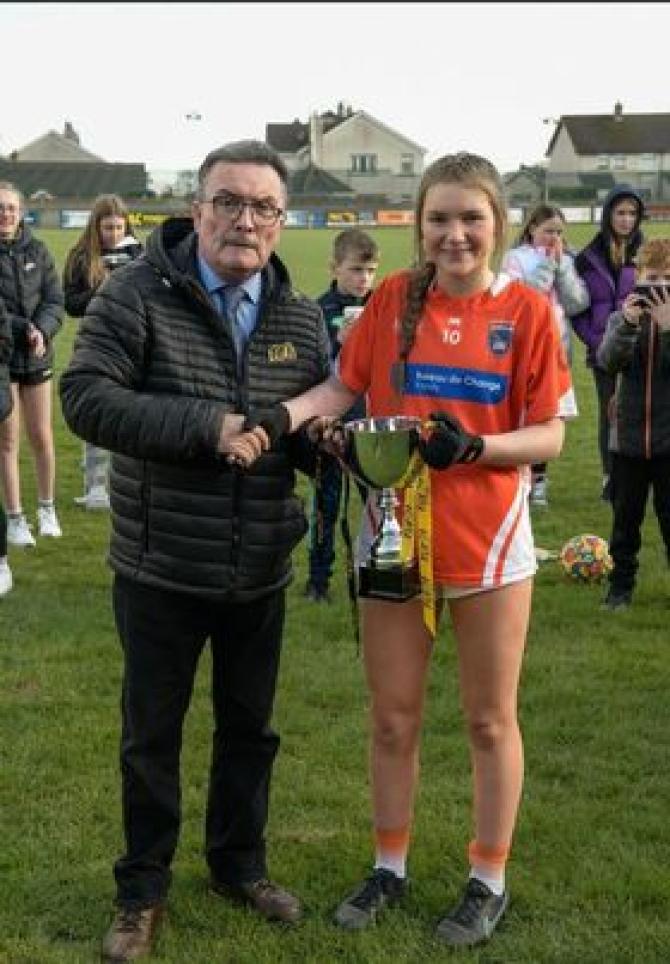 Nine girls from Lurgan, who form a big part of the Armagh under 14 side which won last weekend's Ulster Platinum title, will be in action again at the end of this month in the All-Ireland semi-final.

With the side defeating Down on a scoreline of 3-08 to 0-06 under the management of Fergal Duffy, Denise McDonald, Bronagh Donnelly and Fiona Owens, the young team will no doubt be keeping an eye on the senior ladies' side in Sunday's league decider.

In last weekend's Ulster final, Down started strong with the Armagh girls slowly wearing the lead back, but the Mourne side lead by four at the break.

However, the half time talk certainly had the required effect and the Armagh girls came out stronger in the second half.

With teamwork and cohesion well improved and the link-ups making a telling difference, the kickouts from Annie Rafferty (Granemore) were beginning to find their targets with, in particular,  Moyà McGrane from Ballyhegan in superb form.

Erin Melonaphy at number 6 had an effective sweeper’s role. Annie Rice made a telling impact when introduced, and in the middle midfielders Evie McCafferty and Olivia Campbell worked tirelessly up and down the pitch.

The introduction of Caoimhe Magennis from the Clan's, who got her name on the score sheet with her great interception and chip over the keeper, cemented the victory.

Charlotte Havern (Carrickcrupen) had a stormer and was particularly mobile throughout the hour.

The half forward line of Aoife, Cassi and Anna worked well as a unit and supplied superb possession.

The speed of Eilidh Méabh Duffy (Pearse Ogs) on the ball made it difficult for Down. Alannah O’Neill at full forward was always a threat to Down. Caoimhe Galloghy (Derrynoose) was superb but unfortunately suffered an injury which was a blow for the Ulster champions.

The game was over with five minutes on the clock when an interception found Ella Owens (Killeavy), who was outstanding throughout, found Emma Harte (Pearse Ogs) to put Aoife McDonald clear with great vision. Aoife sent Cassie Henderson who supplied the finishing touches.

Having been behind in the early stages Armagh can now gain confidence from the win with the semi-final pending.