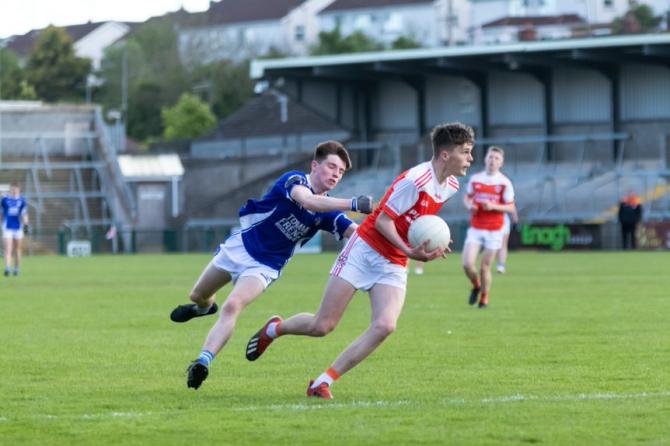 Last night's league opener at under 17 level, which saw the dominant sides from the past two seasons at under 15 level face off at Davitt Park, brought a full gambit of superb skill, tenacity and endeavour along with sublime passages of play.

Both sides could have provided debates as to their worth on the night, but for the moment the early season bragging rights belong to the Lake Street side who kept their county stars on the bench until the closing stages, and just about did enough to have a cushion of four points on the final whistle.

The brilliance of James Austin for the blues who hit seven of his side's total was bettered by a cruising performance from Cohen Henderson, who hit 1-08 and it took it all, and two superb goalline stops at the death by James McStay and Liam Caroll between the sticks to keep a driven blues outfit steered by the prolific Callum O'Neill at bay.

While the Armagh skipper was in superb form, the collective totals on the ball of young Creery and Moriarty for the winners was most telling. The lad J.P. Mc Alinden again looks a player to keep an eye on.

The visitors essentially made their match winning move when Creery saw his sublime effort from distance come back of the post to allow Henderson to finish from close range on the quarter mark. The score gave the blues an uphill task on the short whistle.

With keeper Caroll and Tiernan McDonald entering the action, and the Lavery boys heavily involved for the blues, a Moriarty strike and a finishing effort cracked over by Darra Whitmarsh for the Shore Road side responded to Austin's promptings at the other end. J.P. Mc Alinden hit his second and the game's best.

These sides have serious futures. The level of talent in both camps is, in a word, "staggering".

The Clan Na Gael coaches are, of course, in the best position to judge the worth of their players, but the lad Shay Murphy who enjoys his role between the post could retrospectively become one of the club's top midfielders, or in the modern game maybe he already is.

Oisin Moore for the blues and young Charlie Haddock have real quality.

The volunteers who have coached these players from the "mini" days should take a bow.