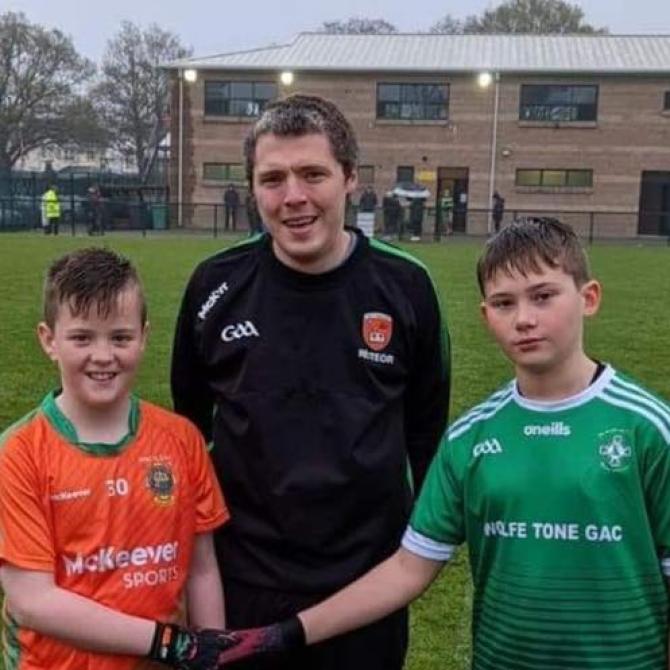 A former top Armagh referee, who is still part of the  committee who oversees the appointments and well-being of young officials, believes that a new recruitment drive is necessary to make sure all games are covered in the future.

Respected St Peter’s man Mickey Leonard, who has been instrumental in the guidance of new referees like Neill McGeown (pictured with Eire Og and Wolfe Tones captains) has, along with others, been working tirelessly behind the scenes to bring new talent through.

Mickey said, "Young McGeown from the Sarsfields has a bright future in refereeing in Armagh.

“I have attended a number of the games he has been in charge off, and have been very impressed.

"We have a number of very good young referees coming through the system, but there is always a worry for the future. We need to keep giving encouragement.

“Being a referee in the modern game is a lot different than with years ago. The lads have an Academy to go through with Croke Park, but will find it all very rewarding.

“I can honestly say that after doing the job for 25 years I rarely heard a negative word. Most referees would also tell you that. The young lads will get plenty of support.”

Neill McGeown has been very impressive since becoming involved in refereeing three years ago. His dad, Eamon, took up the whistle back in the 80s and 90s

Mickey, a popular St Peter’s clubman, added, "I had a word with young Neill as I did with other refs after games. They need encouragement and praise. The only way they will learn is to be in the thick of it

“There is always a need for more referees. It would be a pity to see games called off due to the lack of officials, but we are always hopeful."