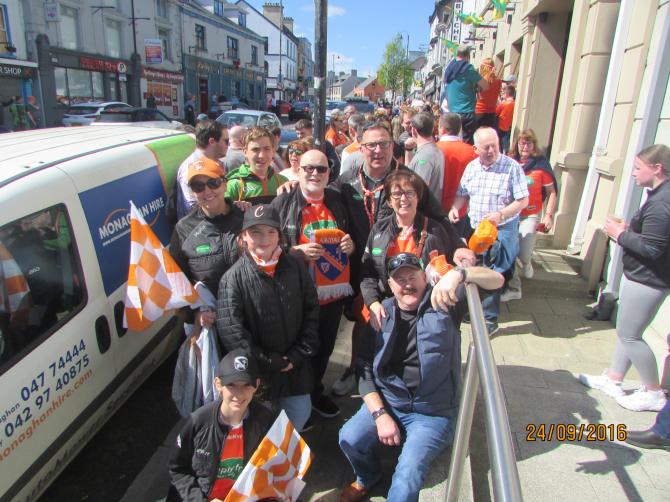 Last year following Armagh's departure from the All Ireland series I asked the question - have Armagh peaked?

The question wasn't about the progress or the strength of the squad but the county's ability to win silverware, yet many fans became annoyed at the fact that question was even been asked.

A constant evolution it appeared and had been brought to a new level following wins over both Dublin and Tyrone. The first outing under lights in Croke Park was, in retrospect, a lot more damaging that a first day out victory in Armagh over the likes of Kildare.

Rhe suggestion is that Kieran McGeeney's side were thrown directly into the spotlight, with the bookies offering reduced odds (pulling the punters in) on competitions which they had calculated Armagh couldn't win.

Crossmaglen-like football suited the forwards (Rian O'Neill's goal against the Dubs), but in the white heat of championship, Donegal laid bare all the old flaws built in years of playing at a lower grade.

Division 1 football was supposed to bring Armagh to the cutting edge of provincial glory. It was said Bonner's men were ageing, Tyrone had lost half of their squad, Monaghan mostly flatter to deceive (this years winners?) and Derry are just ok.

There is more to be gained from this Armagh team playing Kamakazi football than can be achieved from minutes of possession and no shots when that split second arrives.

Three moments of brilliants arrived from the Lurgan lads - Tiernan Kelly burst forward on Sunday to crash over a superb strike, Turbo with blistering pace raced clear before finishing, and in what was one of the scores of the season Stefan Campbell with nothing on, sold two dummies on the run to hit a trademark point. All cavalier, but telling.

With Rian O'Neill almost certainly being affected by recent events and the game in Letterkenny, he was starved by first phase possession, and faded as the game progressed. Would 20 Kamakazi balls crashed in on top of Soup, Turbo and O Neill have had any less of an affect than reaching the D, before delivering a backward pass to the keeper (and should backward passes be banned from inside your own half? What a game that would make - the GAA have tried everything else)?

Before "the boys of summer have gone", Kieran McGeeney will attempt to galvanise the fans, and knock on the back door, but they too have a duty to at first understand why the County board had to pursue all avenues to clear its players, irrespective of how they performed in Ballybofey.

It was easier for Donegal to deflect any potential appeal. More ring craft, a partisan atmosphere (Armagh fans were very quiet, maybe they should huddle together more like the Donegal supporters? Right beside players tunnel, who jeered and booed everything orange and roared on everything else).

Much will be analysed surrounding what might have been in Ballybofey, but there is no debate around who was the better team.

Bringing credence to a road "less travelled", is the remit of an under pressure Kieran McGeeney. Geezer will be feeling it, and it will take all his heroics from 2002 and more in his most telling period of management.

Try the Kamakazi stuff, at least if it doesn't work it will be exciting. When the keepers start conceding from the halfway line it will all stop.

It after all was only the league... not again!