Battling Armagh Minors out of Ulster 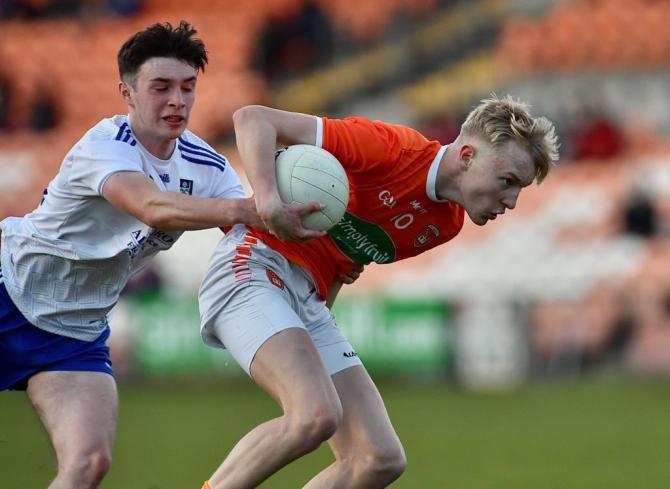 A battling Armagh side bowed out of this season’s Ulster minor series on Friday night at the Athletic Grounds, where they put a bad performance against Derry in the previous round behind them.

Clan Na Gael players featured at the beginning and the end of the encounter with team captain Callum O ]’Neill blasting home his side’s only goal after just two minutes, and James Austin hitting the last brace of scores of a game which the visitors deserved to win.

Shea Murphy of the Clans started in goals behind his clubmate Shea McCann; St Peter’s Fionnbar McKee, who knocked over an early score wore the number four jersey; and Maghery youngster Padraig O’Keefe (pictured) had an impressive first half.

James Austin had an impressive last quarter after being introduced.

After O’Neill's early goal Monaghan settled to lead at the break on a score line of 0-10 to 1-03. McKee and Harps player Dara Closkey galvanised a great score from Rangers’ impressive youngster Aaron O’Neill.

While goals were at a premium, both sides had several guild-edged chances. Murphy in the home side’s goals, in tandem with great defensive work by McCann, got down at his near post to parry, and an Aaron O’Neill effort was pushed to safety by Farney keeper Oran Finnegan.

Monaghan's number five, Johnny Laville, was outstanding on a night where the winners produced some of the best high fielding seen at the ground in decades.

On another night the young Orchard side may have been closer, but they paid for some erratic shooting and just couldn't get a handle on the visitors who kept finding more.

The winners’ midfield pairing of Sahl Arya and D.J. McElvaney were superb with their full forward Eoghan McFarland causing serious problems for the home defence.

Tyrone and Derry look to have the competition at their mercy, as Monaghan move on to face Down. After the heavy Down defeat, the young Armagh side certainly showed a lot of pride and determination.