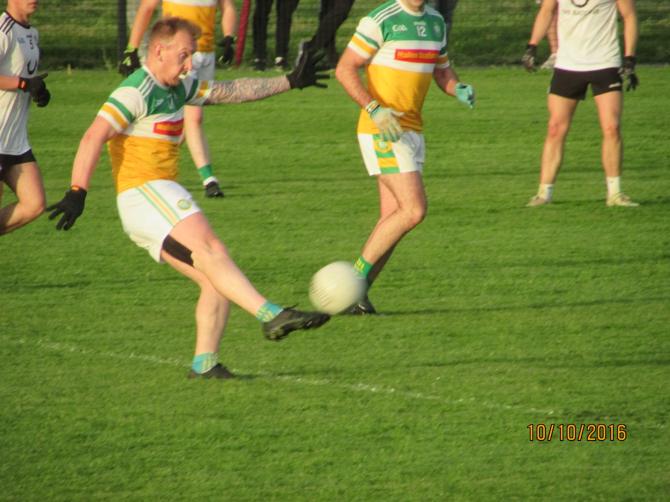 The rousing finish had team boss Shane McConville's fingerprints all over it.

It could be argued the home side should have hit three first half goals with the visitors living on crumbs, but efforts from Niall McParland, Ryan Lawless and one from Charlie Harte screamed just wide to add to a tally of eight wides in the opening period.

However the Whites, who saw their marquee striker Nial McConville swarmed on several occasions, settled after a shaky start to go five clear on the three quarter mark.

The Free Crow side were holding on by their fingernails when Trasna referee Neil McGeown added on six minutes at the end of a gripping contest which saw Ryan Lawless (pictured), Eoin McConville who was accurate throughout and the superb Ruairi Grimes at the double smothered a Niall Creaney point before Peadar Nash popped up on 36 minutes to crash over the equaliser.

The game, which started tamely, finished in superb fashion, and although Grimes, Nash and Lawless steadied the ship, the performances of Niall McCorry, young Shay Murphy, Fitzsimmons in the middle, and in particular Anton McParland who was the best player on the pitch before leaving the action with an injury, were all inspiring.

For the Whites Oisin Ginesi is elegant and impressive. The St Peter's striker swooped for a brilliant finish on 45 which seemed enough to win the tie on the back of a steadying performance from Ciaran McCavigan who battled with McCorry for the score of the game.

Eugene Doran was sublime throughout just in front of James Moore who had a very impressive 60 plus minutes.

Whatever about the semantics of it all, St Peter's lost influential full back Sean O'Neill to a second yellow card at the death with team boss David Wilson being forced to reshuffle his defence when the Saints were on a finishing rampage.

Did the visitors drop big Aaron Findon back a bit too soon, with possession crucial in the middle during the dying minutes?

Eoin McConville was unerring from set pieces throughout. Decky Moore was steady for the Whites, with young Toman showing well for St Paul's.

Considering their good start, and indeed great finish, St Paul's deserved to get something from the game. The Whites, while not in vintage form in the second and third quarters, looked to be in control.

But the returned St Paul's boss, in typical fashion, rallied the troops. Converted defender Peadar Nash had the last say on a night where the superb surface invited a classic.

For consistency throughout, Niall McCorry in the middle for the home side was the man of the match.