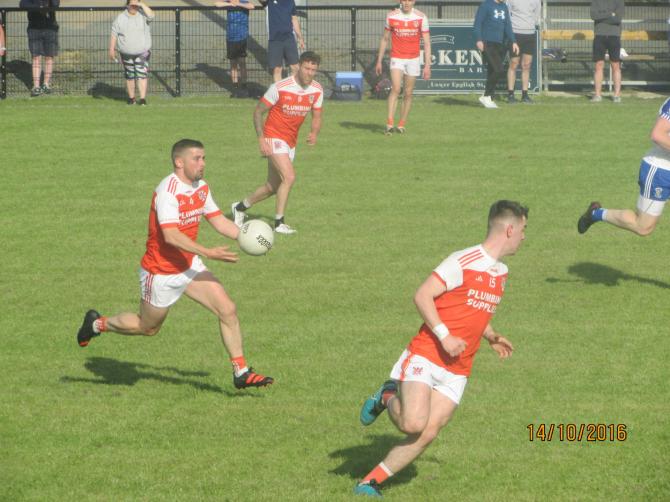 While others were making observations surround the fact that the side were missing at least eight first team regulars, team manager Ruairi Lavery wasn't feeling sorry for himself.

Instead he encouraged a slick outing from players who were hitherto not household names in the 1-12 to 1-10 victory.

Lining out a strong side and including Charlie Vernon, Joe McElroy, Deckie McKenna and the impressive Tom O'Kane, Harps, despite finding the net from an O'Kane strike after 10 minutes following probing by James McCoy, couldn't put any daylight between themselves and the visitors. Deckie Mallon's goal just before the break following a defence splitting run by Dan McCarthy brought credence to any second half challenge.

The Clann's bulging squad were intent from the first whistle. The lad McCafferty at midfield was immense, at one stage pulling a delivery from the roof of the stand. He supplemented the probing's of Henderson and the majesty of the games best Decklan Leatham (pictured) who rolled back the years for a vintage performance.

The highlight was the probings of the winners' number 14, Aodhan McConville, who won almost every ball hit in his direction, coupled with three great points and an assist for Danny Magee to clinch the tie in injury time

Rioghan Meehan was highly involved, and Sean McCarthy, who is one of the county's top defenders, supplemented the superb Conan O' Caroll who pulls out of nothing.

With Harps missing Deckie McKenna for a 10 minutes sin bin, the winners made their move following a late 45 converted by the homes side's keeper Dingle Daly.

With energy in abundance Ruairi McDonald is improving with every game. His brace was crucial, as Harps pressed with scores from McCoy, Murphy and O'Kane.

With defensive tactics kept to a minimum, both sides went about their business in positive fashion.

On a perfect night for football, the more energetic Lurgan side despite missing skipper Heffron, Kelly, Turbitt, McCambridge, Conor McConville, and the long-term absentees Ryan Owens and Johnny Tarode, were slick and effective.

Huge games lie ahead for the Clann's but as their manager Ruairi Lavery said after the game: "I think we are on the right track".