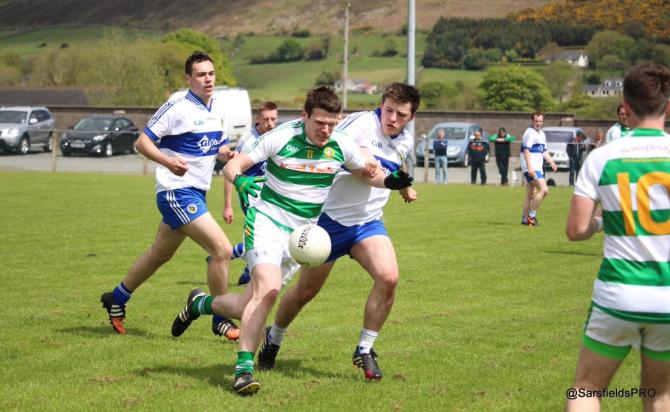 In the biggest local derby so far this season Sarsfield's will host Clan Na Gael in Derrytrasna on Sunday 2pm.

The two games between the sides last season were, in retrospect, not exactly what both sets of fans had expected.

In the first outing and with the Clans without Stefan Campbell, the Lurgan side got over the line to enact the Hoops' only defeat of the league campaign.

Yet, later in the year with Campbell back in the team, the Blues were beaten at Davitt Park by the visiting High Moss outfit who went on to win the league.

The Trasna men have changed their management team since that run, which ended with a disappointing exit from the championship and with current Armagh Minors manager Brendan Hughes in charge.

It would appear that Sarsfields have forever been reinventing themselves. This year they are without the retired and influential Brian Lavery, and are still coming to terms with the loss of Mark Reynolds who was the engine room of the side for over two decades.

While their youth sides are operating in the lower sections of the leagues, they have a wealth of experience in players like Thomas McAlinden; The McGeown's, Eamon and Paul; the ultra-consistent Paul Gaughey (pictured) and the McAlinden trio of James, Kevin, and Sean who are gaining credibility; as well as the new emerging talent of Rioghan Crawford.

The Clans have a conveyor belt of young talent coming through the system who are being tutored by their influential skipper Niall Henderson and the steadying influence of Sean Mackle.

Diarmuid O'Hagan has returned to provide the side with a huge boost, and even without Stefan Campbell the Lurgan side still have Michael Toland and Shane McParland who can move between full forward and midfield and who can both cause problems.

The Hoops are particularly difficult to beat at home. They seem to handle the give in the surface which can take visiting teams a while to adjust to.

The game should encourage a big crowd, which would even have been bigger had the fixture been pencilled in for the Friday or Saturday night, considering the fixture list on Sunday.

On a recent line of the form the Clans seen to have more room for progression, but as with last season there will be very little between the north Armagh rivals.