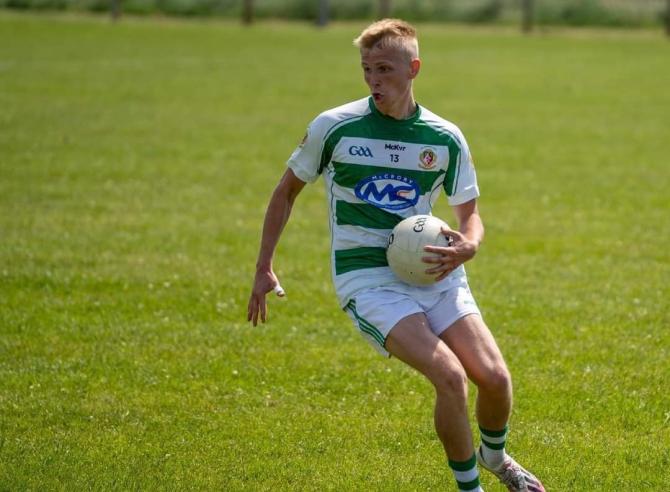 Trailing by two points at the break, Sarsfield's outscored visitors Clan Na Gael 2-07 to 0-05 in the second period in Derrytrasna to grab both points from this untidy Senior B derby.

Although the game was far from controversial, it finished with a dismissal of Blues midfielder Shane McParland and the banishing from the touchline of new Hoops boss Brendan Hughes, who might have been put behind the wire for an altercation with the referee.

Despite a brisk start the Clans were flat in the second and third quarters and left themselves with too much to do with 14 players following superbly worked second half goals from Kevin McAlinden (pictured) on the restart and a Paul McGeown effort. Both were slick and built from the back with their side’s new found pace.

The slippery conditions provided an extra edge to the nervous tension surrounding the passages of play. The fundamental errors from the Lurgan side might be worrying for boss Dairmaid Marsden, but the Clans can improve with young McCreanor, Diarmuid O’Hagan and in particular Stefan Campbell back in the fold.

With the Trasna side expecting a death knell scenario surrounding their future at senior level forever in their ears, the High Moss were at times impressive and looked a lot more experienced in most departments than the visitors.

Kevin McAlinden, who is a maturing player, hit 1-05 for the High Moss in a sterling outing, and with Eamon McGeown firstly dropping under his own crossbar in the early stages and pushing forward in the second period, the lanes began to form with Paul McGaughey, Paul McGeown, Caoiln Skelton and Thomas M Alinden switching defence to attack in flashes.

Michael Toland, Niall Henderson and Shane McParland were the main Clans threats in the opening period, with scores from Thomas McAlinden, Colin Stevenson and Paul McGeown keeping the winners in touching distance at the break. McAlinden had earlier screamed an effort past the base of the post to signal a second half intent.

With the slippery conditions allowing for seemingly bad tackles (mostly untidy), the Clans challenge petered out in the second period when Sarsfield's began to hug the touchlines, spreading the play to open the visitor's defence.

Essentially the derby tie turned on it head when Kevin McAlinden found the Blues’ net seconds after the restart, which prompted a Paul McGeown point and the lead.

The Clans never recovered and despite squaring the derby with a Niall Henderson strike, the Hoops’ second goal killed the tie to allow a somewhat  comfortable landing zone for Trasna in the dying minutes.

For the winners, Sean McAlinden was the pick of the defenders, while Michael Toland was lively in the opening quarter. There is improvement in Glen France, with the Loney brothers progressing.

This derby, which promised a lot, didn't deliver for the neutrals. It did, however, provide both managers with some pondering to do moving forward.