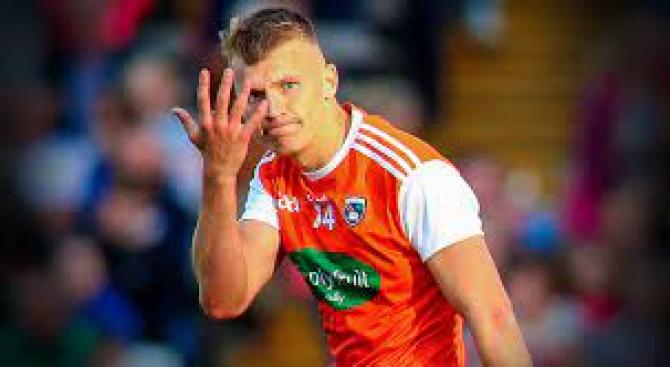 Armagh boss Kieran McGeeney faces the toughest test of his tenure when All Ireland champions Tyrone visit the Athletic Grounds the weekend after next for a winner-takes-all clash.

The home side, who were in retrospect out-classed by Sunday's provincial finalists Donegal, saw the Red Hands crushed by a resurgent Derry outfit.

However, with all the cards on the table, the memories of this season's league encounter - which saw a host of red cards and a lot of appeals - will be in the minds of the fans as the players once again attempt to walk a fine line between commitment and being overzealous.

The only form which the Armagh players can rely on is from in-house games. Has Oisin O'Neill recovered enough to start? With Tiernan Kelly missing will Clan Na Gael's Stefan Campbell be given a jersey? And, most importantly, can Rian O'Neill (pictured) recapture the form which was missing last time out in Ballybofey?

The only certainty is that it will be a full house.

As Armagh's underage sides struggle, the Red Hands are still winning national titles - a reminder of the huge strength still at their disposal. There is no doubt that this is the best Armagh team for a decade. The modern form dictates the logic.

Some supporters, however, have stressed that there might be a lack of bite at midfield and a shortage of pace at the back. If McGeeney can let the forwards attack and their defenders defend there might be a minor upset on the cards.

Tyrone will need little motivation on their way to the Athletic Grounds. They will not have gone bad overnight, but they have looked this season to be less hungry than in 2021, getting better as the competition progresses. Brian Dooher's outfit ooze class but have a few mavericks in their line out who can bounce between mediocrity and brilliance.

Armagh will need to be at full throttle to win. Tyrone might shade it further down the gears. Like a "rabbit in the headlights" the first league win over Dublin brought an expectation which eventually petered out and died against Declan Bonner's side last time out.

Is the pressure now off? For the players maybe, but as for the manager 'Geezer' sets himself very high standards.

Form? There is no form, and nothing to go by. The big gaps since the league defeat in Letterkenny have rendered the club players redundant, and the squad players apprehensive before the match day 26 are chosen.

In the interim the fittest Armagh team for a decade will be tested on their skill against a side who have achieved even more than a Donegal outfit who were comfortable in the opening round.