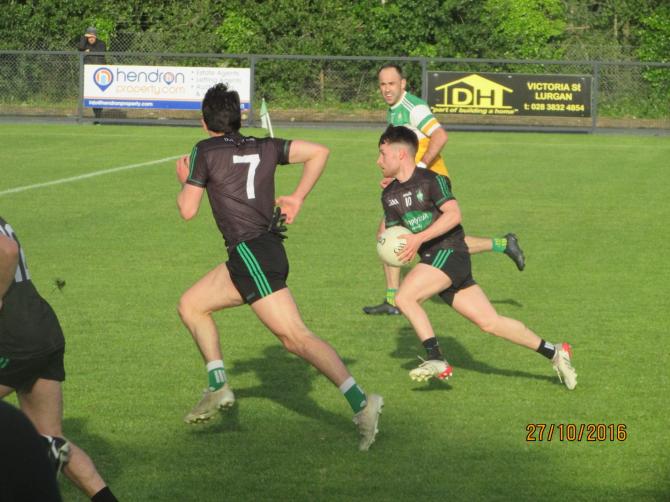 Grimsey, who has had coaching duties with several sides particularly in the ladies' game was brought to hospital midway during the derby at Derrymacash, with one of his team mates Niall McParland, bringing things into perspective.

He said, "It's great to sustain our winning run, but for the moment we hope that Ruairi makes a quick recovery from his injury."

With Ruairi Grimes playing a pivotal role, St Paul's have bounced back this season to take the lead on the finishing line. There was no need for a comeback last night however at the Cash, where they dominated the game from the whistle and lead at the break on a score line of 0-10 to 0-02, with the homes sides tally coming from the boot of the influential Jamie Haughey, both from 45's.

The Tones' keeper, Callan Duffin, was superb both in build ups and on his line. He pulled off several crucial saves over the 60 minutes including a penalty stop from McParland in the closing stages.

Up front Niall McCorry, who moved from midfield, was sublime, cracking over five points from play on a night where his side were missing Murnin, Lawless, and young and young Anton O'Hanlon amongst others.

Without Geddis and in particular McCarron, the Tones struggled to gain a foothold and despite a better second period they couldn't breach a stern visiting defence given outlets from the marauding Harte and Magill.

With Josh Magurran, Jack Wilson, and Paudie Judge lively up front , some clever approach play from the home side soon faded with a commanding Clem Lyness between the posts relieving any Derrymacash pressure.

But it's just another win according to Saints Niall McParland,..

He said, "It's always good to get a winning run.

"Ttonight's game was a bit different from the last couple where we had to to come from way behind, but Shane (McConville) demands a level of intensity so there is no time to slacken."

It should be noted that Darren Fox, who was introduced for the injured Grimes, had a big role in the win, hitting a hat trick of points.

Matthew Hagan was the pick of the Tones' attack, with Jamie Haughey and Chris McCarron excelling despite swimming against the tide.

Eoin Mc Conville was available under all circumstances both from play and set pieces, and McParland just about pipped the evergreen Peadar Nash for the man of the match award.

Remembering the game for Duffin's performance would be a positive for Wolfe Tones, who need points to avoid the drop. St Paul's are once again reborn with the return of Shane McConville. Could he be a future Armagh manager? What would be the debate against?