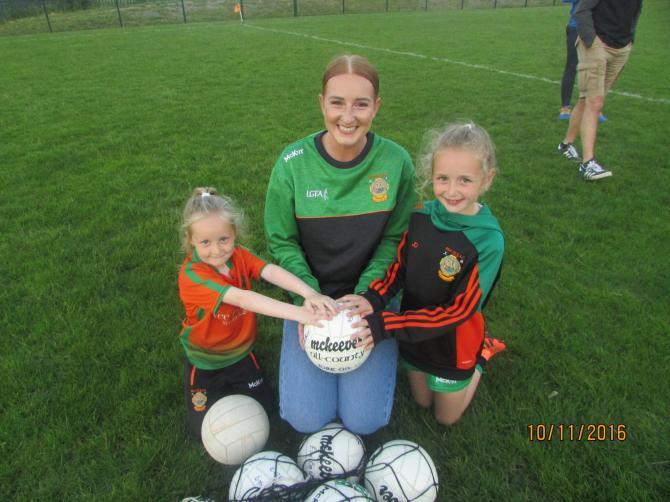 Armagh boss Kieran McGeeney will face the biggest game of his career to date when his side travel to Clones for an acid test clash with Donegal, who are attempting a hat trick of wins over the Orchard men this season.

Fresh from an impressive outing against Tyrone and encouraged by their fans like these Eire Og supporters (pictured with Ogs ladies player Laura O’Hagan) Armagh will look for back-to-back qualifier successes against Declan Bonner’s team, and on this occasion the tie is at a neutral venue.

With a huge support planning to travel there are still quite a number of diehard club followers who can’t wait to see their players back in action when the county side eventually bow out of the All-Ireland series.

The bookies have the sides locked with the smart money being laid on a draw at the end of normal time. If Donegal haven't been damaged by the extra time defeat to Derry and Armagh aren't still in the clouds after having dumped the All-Ireland champions out of the series, then a titanic clash is on the cards.

Last week’s midfield pairing of Ben Crealey and Stephen Sheridan will have a tougher task on their hands against Jason Magee and Hugh McFadden, with Brendan McCole again set to police Rian O’Neill. Orchard fans can take some solace from the fact that O’Neill only scored one point from play against Tyrone but other forwards who took responsibility rose to the challenge.

To be fair, it would be a surprise to see McGeeney change the starting line out from last weekend, which would mean no place for Conor Turbitt and Andrew Murnin who both made impacts from the bench. The fans will be waiting on news about Conor Mackin.

When the sides met earlier in the year, the selected Donegal full forward line hit a total of 1-08 as McBrearty, Murphy and Brennan all chipped in.

Peadar Mongan, who was a constant thorn in the Armagh side, could also start, with player-maker Ryan McHugh switching throughout the game.

If Kieran McGeeney's side are to be taken seriously on the big stage they will need to at least repeat the performance at the Athletic Grounds.

Around 25,000 fans are expected to climb the Clones hill and crawl back though congested traffic after the game.

Injuries to the emerging Tiernan Kelly, Niall Grimley, and a host of others will guarantee Stefan Campbell a start. The Clans player should again have a huge impact on proceedings.

Donegal have been a lot better than Armagh over recent years, particularly in the two outings this season. The Orchard are a much improved team, Donegal have the experience - that might just shade it.