Clann Eireann go clear at top after win over Blues 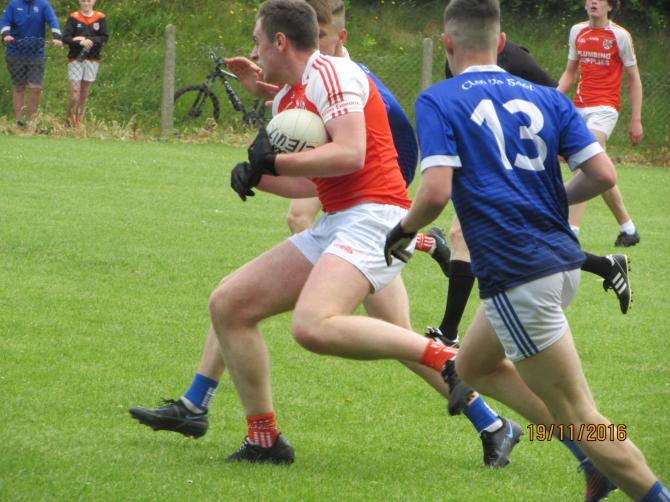 Following their one point win over Crossmaglen earlier in the week, Clann Eireann's under 17 side went clear at the top of the Armagh league with a three-point win over Clan Na Gael today.

The game was played on the hurling field at the North Circular Road, in blustery conditions which would explain the many wides hit by both sets of forwards over the hour.

While the visitors found themselves behind on a scoreline of 1-03 to no score after 10 minutes, Cohen Henderson hitting the net for the winners in an overall tally of 1-05.

But the Clans lost a defender with a straight red before the break and a player to a sin bin offence, before the home side also went a man down to a second yellow in the last quarter.

Henderson's tally was bettered by a great outing by Finn Campbell and Moriarty at midfield for the Lake Street outfit, who was highly involved throughout.

James Austin struck seven of his side's points and the Blues' goal, which came before the break from the effective Tom Lavery after the ball had come off the post from an initial effort.

Blues keeper Shay Murphy made a great save from a Henderson effort on 44 minutes, with the best score of the contest struck over by the stylish Tiernan McDonald.

Although the Francis Street side battled throughout, and were just one score behind on four occasions, they just couldn't get their noses in front against a good full back line superbly marshalled by Darra Whitemarsh wearing 3.

The play was superb considering the conditions, and although the "game of two halves" didn't materialise, with both sides managing the elements well, a little more physicality from Clann Eireann was the telling factor.

With Callum O'Neill being double teamed at times when in possession, the Lake Street side -who have now done the double over their Lurgan rivals this season - were a little more balanced.

In the championship, it looks like a three horse race, with the Lurgan rivals and Crossmaglen all fancied. Clann Eireann now look nailed on for the league title, today's game signalled big futures for both sets of players.