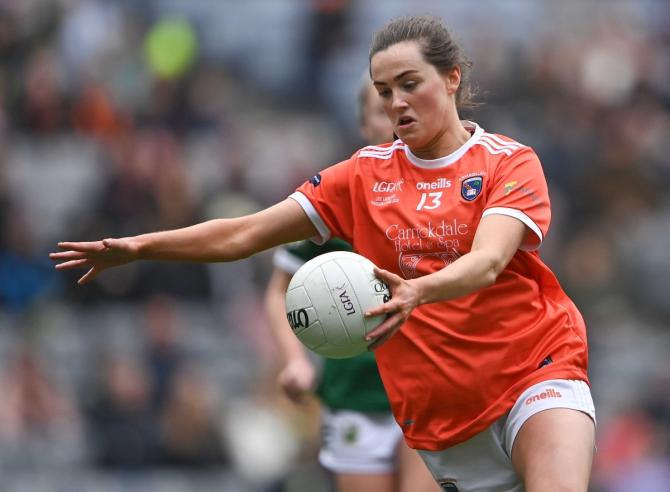 Aimee Mackin scored 0-4 and Armagh eased their way past Monaghan to qualify for the last eight of the TG4 All-Ireland Senior Championship after a 2-12 to 0-4 victory at the Athletic Grounds.

As a result, Armagh finished second in the Group B standings behind reigning All-Ireland champions Meath with Monaghan heading for the relegation play-off.

With a very strong breeze at their backs, it was the away side who started the better, as they notched two points in the opening minute through Lauren Jones and Laura Carey.

However, Armagh settled themselves down and scored six of the next seven points, with captain Kelly Mallon showcasing her accuracy from dead balls, converting four frees.

Monaghan then had a major goal chance when Rosemary Courtney got through to find herself one-on-one with Anna Carr, but the Orchard goalkeeper spread herself and made an outstanding save, denying Courtney’s effort with her foot.

While Monaghan failed to find the net, Armagh made no mistakes, and the game swung completely in their favour with two goals in as many minutes. Blaithin Mackin shot for a point, but with the goalkeeper Orna Kelly unsighted by Aoife Lennon, the ball bounced all the way through and into the Monaghan net.

Soon after, a Niamh Marley pass sent Niamh Coleman through, and she buried a one-on-one chance low and hard to grow Armagh’s lead to eight points at 2-6 to 0-4, and three Aimee Mackin points closed out the half’s scoring.

After an entertaining first half, which displayed some ferocious attacking play from both sides, the second-half didn’t live up to those standards.

Armagh were content to hold the ball for long periods throughout the second half, with only three points scored, via Niamh Marley, Coleman and Caroline O’Hanlon.

On Monaghan’s side, they failed to register a score in the entire second half, as they struggled to make many inroads into a packed Armagh defence.

Having qualified from the group, winners Armagh now progress to the quarter-finals, where they will take on Group C winners Kerry.