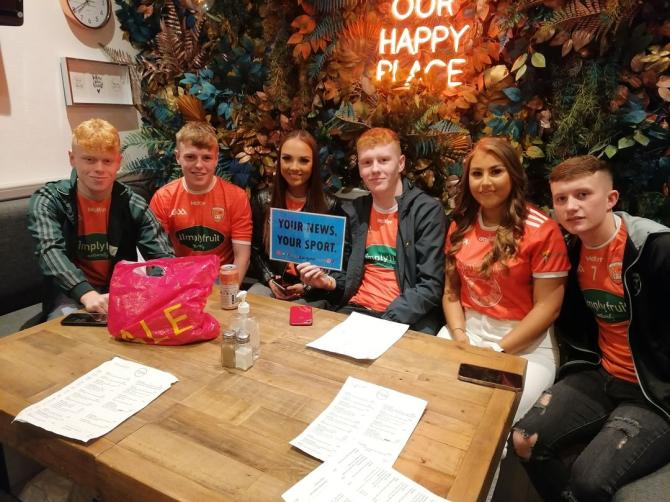 Armagh fans gave their side a standing ovation at the end of yesterday's pulsating and historic All Ireland quarter-final at Croke Park.

They had witnessed one of the most memorable occasions seen at the Jones Road venue, which brought to an end a memorable year, but with no silverware either on a provincial or national stage to show for their efforts.

Kieran McGeeney's side pulled back a six-points deficit at the end of normal time to force an extra time period, but with the pace of the game slowing it began to dawn on the fans that the dreaded penalty shoot-out was on the cards.

Not for the first time this year, Armagh have been involved in controversy. Ugly scenes were witnessed when both sets of players attempted to squeeze down the tunnel at the end of normal time, and with H.Q. no doubt expected to crack down yet again, it will be a nervous few weeks for several players.

It would appear that controversies surrounding spot kicks is built into Armagh's psyche. The famous Bill McCorry miss in ‘53, Paddy Moriarty scored one and missed one in ‘77, and Oisin McConville had his effort saved in the final of 2002 before striking a match winner from play against the Kingdom.

The will be no harsh judgements either historically or on the courage of both Stefan Campbell and Conor Turbitt who missed yesterday, only a commendable realization that both showed sterling resolve in the heat of battle and a huge amount of highlights from a year where they delighted the fans on many occasions. It was strange, however, that Rian O’Neill who has been "scoring for fun" recently didn't hit the first spot kick, with a conversion assured.

It would be difficult to argue that Galway being the more polished and organised side, but the loss of Greg McCabe was a huge blow and resulted in the winners double teaming Rian O’Neill in the closing stages. Neither, however, could stop the Rangers man smashing over an equalizer at the death and the best score of the afternoon.

Despite winning Galway boss Padraic Joyce said, "My heart goes out to Kieran McGeeney and his team, its no way to lose a game.”

Fans have also had their say. Former Armagh senior coach Gary Mallon commented, "I think you should be entitled to a replay and if it’s still a draw then penalties.".

Cathy Canavan added, "Should definitely been a replay. It was a sad way to end our game after the boy's fought so hard" Frank O’Hanlon suggested games that finish in a draw should be replayed, adding it was an “old tried and trusted mechanism” and that the “GAA would have filled Croke Park once again with Armagh supporters".

Stephen McCreanor said penalties were "the fairest and simplest way to decide the game if replays can’t be accommodated.

But he added that the decider “should test the skill of the game, perhaps a penalty out of the hands outside of the 14. Not a soccer style penalty shoot-out. All said and done, Galway edged it overall on the day."

Stephen Codd had an interesting take on it. "I think what's being overlooked is that a player who misses a penalty now can maybe be vilified and singled out for his county's exit regardless of his performance during the game.

“It’s totally unfair on the players. Only need to look at what treatment certain soccer players get in the same position, and I'm not suggesting for one minute that we would behave like them, but the potential is there for abuse for missing a penalty.”

Therese Hatzer sugggested, "With anything else but penalties, Gaelic is far from soccer. [A] replay would have been the fairest outcome".

John McStravick had this to say: "Disgraceful way to decide a winner. What part/skill does penalty kicks add to our game? [It] only puts a burden on the lads that missed.”

What do you think?