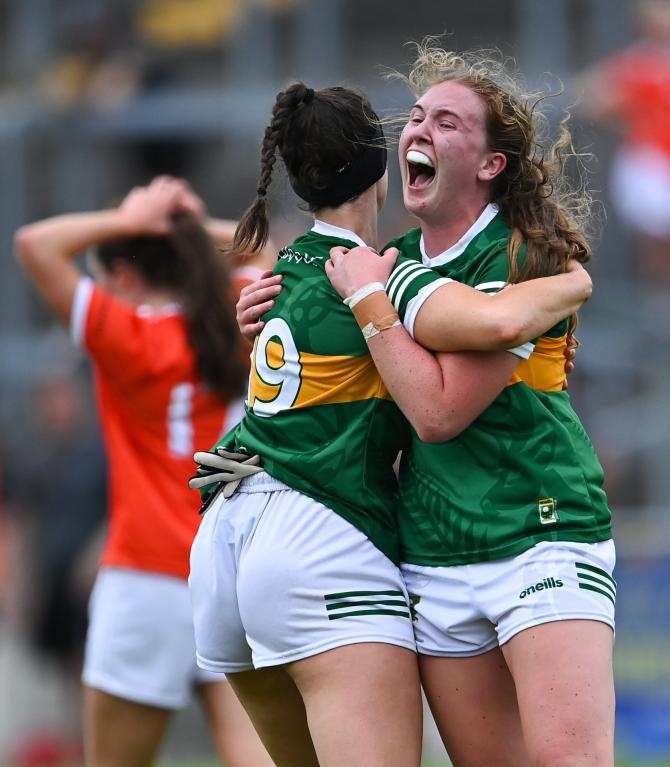 Louise Ní Mhuircheartaigh struck 2-6 at O'Connor Park in Tullamore as Kerry set up a TG4 All-Ireland Senior Football Championship semi-final against Mayo with a four-point triumph over Armagh.

In addition to the Corca Dhuibhne ace’s scoring prowess, Niamh Carmody and Siofra O’Shea also rattled the net for the Kingdom. The majestic Aimee Mackin finished with an astonishing 0-11 haul for Armagh but the Orchard County ultimately suffered a second consecutive quarter-final exit.

After Ní Mhuircheartaigh and Aoife Lennon traded points in a pulsating start, Carmody combined to devastating effect with O’Shea for a superb fourth-minute Kerry goal.

The always-influential Mackin came to life with three excellent points, but additional scores from captain Anna Galvin, Danielle O’Leary and Katie Brosnan ensured the Kingdom were three points in front, 1-4 to 0-4, on the first-quarter mark.

Both teams remained committed to an all-out attacking approach as the action progressed and, as a consequence, there were goals galore towards the end of the opening period. While Lorraine Scanlon cancelled out a Mackin free, Armagh attacker Aoife McCoy shook the Kerry net in the 23rd-minute.

Buoyed by this score, the Ulster outfit went on to add points through Mackin (two) and the evergreen Caroline O’Hanlon. Even though a Ní Mhuircheartaigh goal briefly halted their march, another goal courtesy of Niamh Coleman left Armagh 2-8 to 2-5 ahead at the interval.

Galvin and Mackin added to their respective accounts with points on the restart, before Kerry narrowed the gap to the bare minimum with a two-point salvo by Ní Mhuircheartaigh. The travelling Kingdom supporters were then given a reason to be cheerful when O’Shea fired low to the bottom left-hand corner for her side’s third goal on 37 minutes.

A Ní Mhuircheartaigh free helped Kerry to build further momentum, only for a revitalised Armagh to once again restore parity with unanswered points from Mackin (two) and Kelly Mallon. Ní Mhuircheartaigh and substitute Erica McGlynn scored points in advance of Mackin’s 10th score of the game, but the Munster side were in sight of a last-four spot when Ní Mhuircheartaigh coolly slotted home a 53rd-minute penalty.

Yet another point by the immense Mackin kept Armagh in the hunt, but a similar effort from Ní Mhuircheartaigh at the opposite end put the seal on a magnificent win for Kerry.