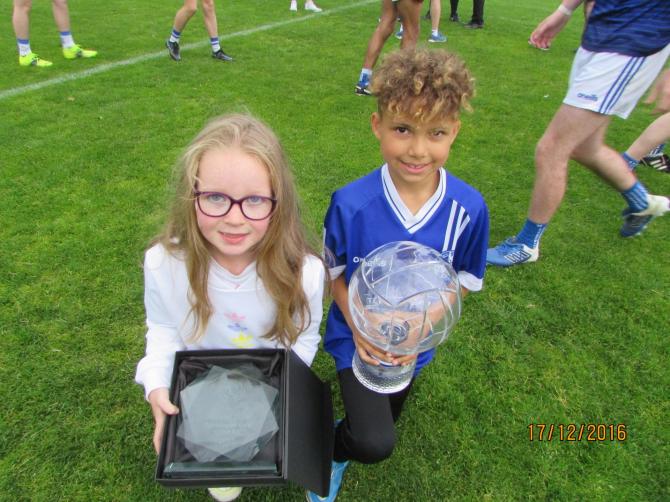 Wolfe Tones chairman Cathal Tighe believes that their U19 tournament can continue to grow.

Speaking after Saturday night’s Michael Tighe Under 19 Memorial Cup and Shield finals, he said, "I would like to thank all those who made the event a huge success, and the hope is that we can build on this in the future.”

With the host club defeating a gallant St Peter’s side in the Shield final earlier in the night, Clan Na Gael ran out 2-09 to 3-04 winners over Lurgan rivals Clann Eireann.

At the end of the event Blues full back Jack Lavery picked up the player of the tournament award for his displays over all of the games, which saw the young emerging star supplying superb link play from defence to attack.

Caolan Campbell, who was the Clans’ only points scorer in the opening half (0-06), also had a great outing. Shea Murphy, their converted goalkeeper, found the net on the quarter mark, with Shea McCann in the middle standing out.

For the north Lurgan side Ethan McKenna, Rogan McVeigh - who hit one of his team’s goals - and Odhran McCafferty had great outings.

Moving forward, all of the sides will now compete in the All County league and championship series, fine-tuned by their run outs at the Derrymacash venue.

During last night’s cup final, the sides were evenly matched with the tie swinging in the Blues’ favour with two quick-fire points inside a minute from Tom Lavery changing the dynamic and giving the winners a slender, if crucial, lead.

Clans skipper Michael McConville lifted the cup for the Francis Street side, with young fans Luca Murphy and Aoife Mc Cann (pictured) joining in the celebrations.

On a lighter note a slight technical hitch on the sound system, resulted in a superb interview with Clan Na Gael coach Sean Creaney falling silent.

Sean admitted that its not often he is quiet so "it makes a change".

Congratulations to all involved in a commendable event.