Sarsfield's in win of the season 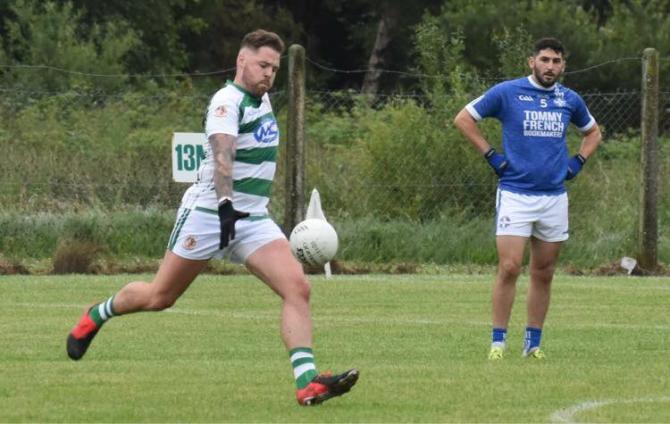 With St Pat’s Cullyhanna struggling this season at the bottom of the Armagh Senior league section B series, they were expected to lower the colours of a high-flying Sarsfield's outfit last night.

The home side had Armagh players Jason Duffy, Aidan Nugent and Ross McQuillan all lining out.

But it was the High Moss who produced the result of the season so far to grab both points and, more importantly, a potential promotion spot.

Following a hectic period where Brendan Hughes side were facing at times, three games in a week, Sarsfield's secured a 1-13 to 1-12 victory to bring further credence to a good line of form following last year’s impressive title win.

Not for the first time it was Eamon McGeown (pictured) who hit a crucial score. This time his goal, supplemented by a superb outing from Tommy McAlinden 0-05 and scores from Michael Stevenson and Kevin McAlinden.

It now appears that the Trasna side have their promotion hopes in their own hands, with a small regret suggesting the lost point against Grange may prove crucial.

With Dromintee lined up in the championship, the Hoops have a huge game next Friday night at home to leaders Ballymacnab who have been one of the top sides in the county over the past decade.

Brendan Hughes’ outfit, however, look to be on a roll. The north Armagh side have appeared to struggled at times in the past but always have the dynamic to reinvent themselves. Last night’s win, considering the opposition, was their best so far in 2022.