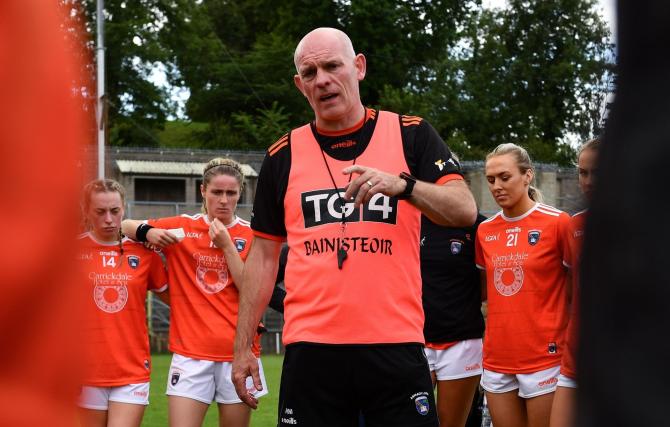 Sunday was the deadline for expressions of interest from those wishing to throw their hat in the ring to replace Ronan Murphy as manager of the Armagh ladies gaelic county team following the Tyrone native’s departure after three seasons at the Orchard helm.

Edendork man Murphy steered Armagh to an unprecedented hat-trick of Ulster title triumphs and the Orchard outfit lost only three championship matches under him but there is still a sense of what might have been during his tenure given the talent at his disposal.

The current Fermanagh management team of ex-Armagh gaffer James Daly and retired Orchard captain Caoimhe Morgan would be seen as a strong ticket to take over even though their Erne women were beaten by Antrim in this month’s All Ireland Junior final replay.

Morgan seems certain to manage Armagh in her own right at some stage but whether she considers now the right time remains to be seen and Orchard followers will hope Caroline O’Hanlon wants to keep playing for the foreseeable future rather than moving into coaching.

Paddy McShane and Joe Feeney have taken Armagh Harps to two ladies county title triumphs in a row after ending a famine stretching back to last century while long-time Tyrone boss Gerry Moane is available after his surprise ousting by Cavan.

Peter Lynch of Shane O’Neills is out of the picture after agreeing to take charge of Down again but the excellent Crossmaglen management ticket of former Armagh footballer Maria O’Donnell and Peter McMahon should be strong contenders if interested.

Other names which come to mind include former Armagh great Ger Houlahan, who is knowledgeable about the ladies county team, and Ciara Marley, who steered St Catherine’s College to All Ireland glory in 2019 and works well with young players.