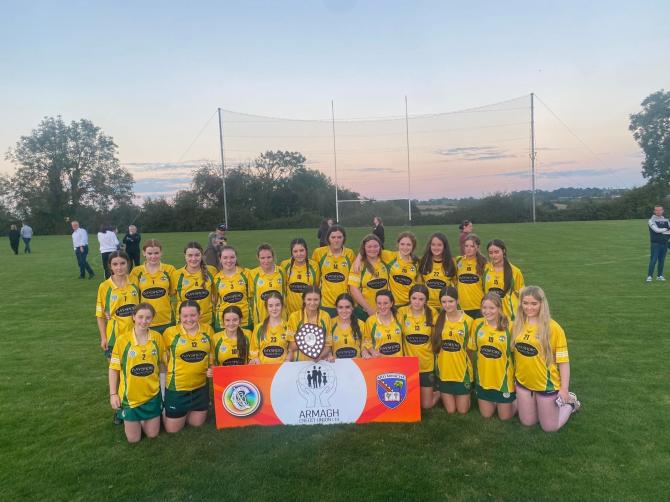 The Division 2 Armagh Camogie Championship Final took place this week in front of a big crowd.

It was a game of north against south as St. Enda’s Derrymacash took on South Armagh’s Crossmaglen.

The opening play was nothing short of enthralling with scores galore from both sides. Cross found the net in three consecutive scores to put them ahead by two points but St. Enda’s soon came into the game taking their chances and reaping the rewards.

Two Derrymacash goals from full forward Brenna Greene saw the half time score reflect a very even game. It really was all to play for.

The second half was just as exciting as the first with scoring opened by a fantastic goal and a point from play from full forward Eimear McGeown.

The Derrymacash defence was then called into action with Cross putting their scoring chances on the board responding with four unanswered points, two from play and two from frees.

At this point of the game scores were coming thick and fast for both sides, another Eimear McGeown goal came for Derrymacash followed by an excellent point from play from Ellen Conway.

Crossmaglen were certainly attempting to close the gap as they fought back adding a further goal and three points to their scoreline, some of which coming from excellently taken frees. The score now was Crossmaglen 5-09 Derrymacash 7-11.

The last 10 minutes of the game was dominated by the Derrymacash team with a flurry of scores. There were further goals from Eimear McGeown and Brenna Greene and points from play from Étain Devlin and Aoibhín Donohue.

The final whistle saw a convincing 10-12 to 5-09 win for St. Enda’s in what was a fantastic game of camogie.

Player of the Match went to Aoibhín Donohue, which very well deserved in what was a superb performance from her.