Clann Eireann out to avenge defeats 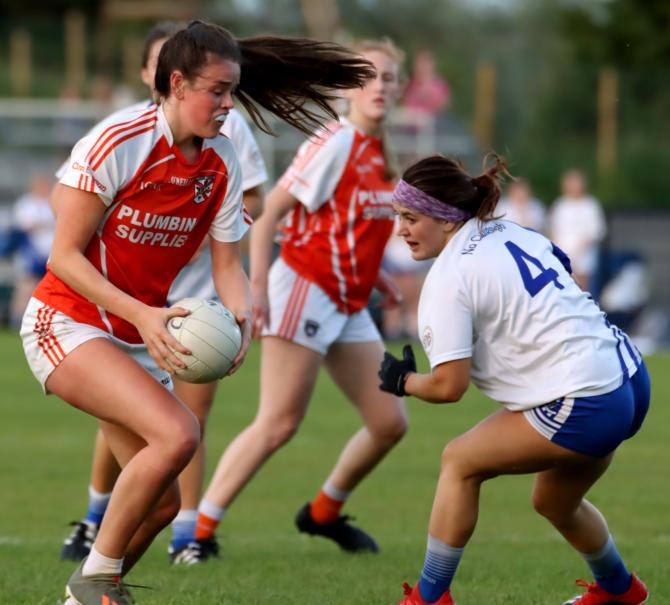 The second Buttercrane Senior Championship semi will take place at Lurgan’s Davitt Park on Sunday (7.30pm) so Clann Eireann will have a much shorter trip than champions Armagh Harps as they seek to avenge being knocked out by these opponents the past two seasons.

Harps hadn’t won a county title since last century but went all the way in 2020 after becoming the first team other than Carrickcruppen to beat Clann Eireann in a domestic championship match since 2005.

That was a very convincing victory in the quarter-final at Abbey Park whereas Harps needed a last-gasp goal by Aoife Lennon to snatch victory in last season’s semi in Dromintee where the holders had been behind for most of the tie.

Paddy McShane’s side went on to retain their Orchard crown by eclipsing Carrickcruppen in the Athletic Grounds decider for a second year running and began their quest for a hat-trick of county titles by beating neighbours Grange 2-15 to 1-5.

Clann Eireann’s away win against Shane O’Neills was by the impressive scoreline of 5-16 to 1-5, though James Daly’s Lurgan giants just led by a single point at the interval before powerfully pulling away.

They will start favourites this Sunday after romping to the McGuinness Plumbing League title with a 100 percent record, a campaign which included a 20-point away win against Harps, who were beaten by 11 in the return game in Lurgan in late July.

However, Harps showed their championship pedigree these past two years and have a fairly similar squad this time under the impressive management of McShane and former county footballer Joe Feeney, who will be part of the Armagh ladies set-up next season.

Legendary goalkeeper Paula Powell Enright has finally fulfilled a long-running threat to hang up her boots but Harps have signed a very good replacement in Chloe Kelly from Mullabrack, who featured briefly in the senior county panel before finishing school.

Kelly won an Ulster Schools All Star at the same time as Harps pair Emily Druse and Casey Mullan, who played a peripheral role for the club last season due to injury after starting the year in the county panel.

In last season’s final, former Orchard camogie captain McGoldrick was visibly inhibited by the hellish injury issues which have halted her expected progression to Irish rugby’s green jersey and snatched away her Armagh gaelic midfield future before it could unfold.

However, she had a big game in the subsequent Ulster quarter-final defeat away to Moneyglass and was voted Harps Players’ Player of Year after fighting through the pain barrier in making a typically committed contribution during the season.

After recovering from injury, Mallon was superb for Armagh this season, Lennon should benefit from having a first inter-county campaign since 2015 under her belt and the superb Burke showed her class yet again against Grange.

The formidable ‘Brat Pack’ consisting of the club’s joint Player of the Year award winners from last season, Megan McShane and Emily Druse, along with Tiarna McVeigh and Jessica Hamill has been expanded by Mullan’s return and the arrival of her accomplice Kelly.

While the inimitable Enright has finally gone, fellow stalwarts such as Tanya McCoy Savage, Siobhan Feeney and Cailin Duffy, who waited so long for the first Senior Championship success of their career, remain on board as the club bid to make it three in a row.

Captain Niamh Henderson, her sister Aoibhinn and Deabhla Coleman have opted out of Orchard duty but have that level of quality, while the then Armagh Minor captain Anna McStay was in the county’s senior panel briefly at the start of last season.

Throw in Meabh McCambridge, a former Northern Ireland Under 21 international netballer who played full back for Queen’s last winter and will surely follow big sister Clodagh into the county panel when she wants to, and it’s easy to see why Clann Eireann are so formidable