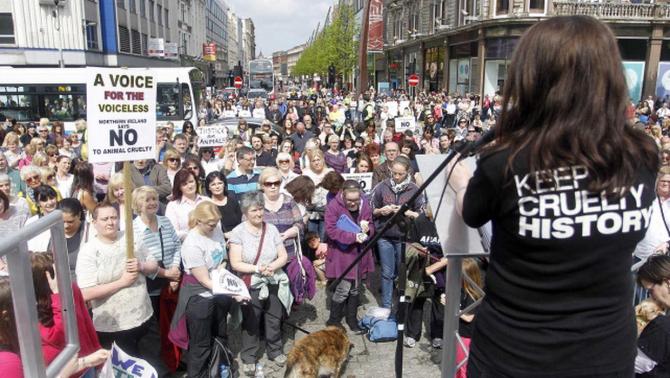 Northern Ireland Says NO to Animal Cruelty group will be protesting at Stormont on September 11.

A Lurgan man, who is organising a protest against a proposed badger cull, has spoken of his concerns about the reasons behind ‘murdering wildlife in blind faith’.

Richie Duprey, who grew up in Armagh, is a member of the ‘Northern Ireland Says NO to Animal Cruelty group’ which plans to protest at Stormont on Saturday, September 11.

The protest also involves the NI Badger Group with the Department of Agriculture, Environment and Rural Affairs (DAERA) proposing the cull to stop the spread of bovide tuberculosis (TB).

Speaking to Your Lurgan, Richie believes that the cull – which is open for public consultation until September 10 – is based on “zero scientific backing” and could cost the taxpayer millions of pounds.

“Northern Ireland Says NO to Animal Cruelty was set up in March 2014 initially to campaign for a change in the lenient sentences handed out for animal cruelty offences here,” he said.

“Whilst our original aim continues to be our primary focus, we have since evolved into a community of like-minded people, and a forum for people to come to voice their concerns, promote animal welfare, raise awareness of animal welfare issues, and to actively get involved in the issues which concern them.

“Currently there are just two of us manning the ship at NISNTAC, but we would be nowhere without other groups assisting us, such as the NI Badger Group, who are the true brains and fact-finders in regards to the badger cull! It takes several groups working together to achieve an end-goal sometimes, and we’re proud to be assisting the NI Badger Group this time around!

“We are organising a protest at Stormont on Saturday 11th September 2021 at 1pm to highlight the issues with DAERA’s proposed badger cull. This will be a farmer-led, indiscriminate cull of our native badgers - which has zero scientific backing as being effective.

“Around 1 in 5 badgers in Ireland actually have traces of TB. We have roughly 35,000 badgers in the north, so 80% of those are TB free. To us, it is nonsensical to murder wildlife in blind faith in the hopes that it will miraculously make Bovine TB cases drop.

“The UK government’s own Independent Expert Panel branded culling badgers ‘ineffective’ and ‘inhumane’. DAERA could emulate the successful approach taken by the Welsh Government, which has rejected badger culling yet has already achieved a 50% reduction in bovine TB through improved cattle testing and more effective cattle measures - but instead, they’ve opted for a method that has no science behind it, so it’s up to us to make a stand.

“This cull could cost millions to us, the taxpayers. Millions for something that doesn’t even work. Surely it would better spent on the methods that do work? That’s our viewpoint on it.”

The protest has the support of two political parties and the USPCA, with Richie explaining that the cull could begin as early as next year.

“We have held several protests and rallies in the past. Our most notable were our rally against puppy farming and of course, our protest against lenient sentencing which seen several thousand people standing in Belfast to make their voice against animal cruelty heard loud and clear,” he continued.

“The Green Party and Alliance party have been very helpful in highlight their opposition against the badger cull and we expect representatives from a wide array of parties to be in attendance of our protest.

“Mike Nesbitt and Alex Easton MLA have also been extremely vocal in their opposition against DAERA’s badger cull. Alex Easton has a petition running, as well as the USPCA which will both be presented in Stormont.

“If the proposal is passed, the cull could begin in July next year and it will take place over several months every year and it could just run indefinitely.”