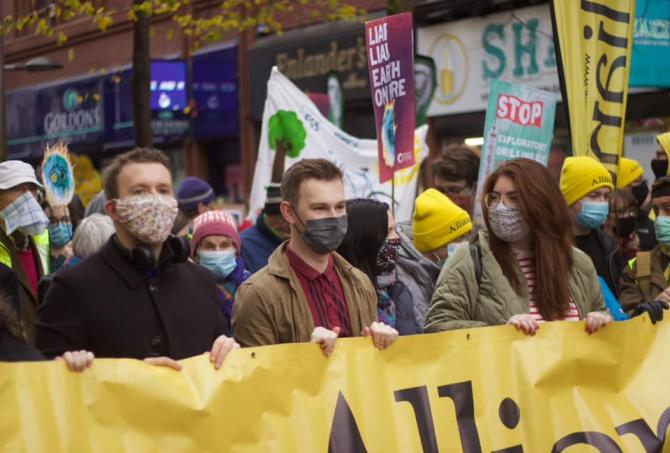 Alliance Upper Bann representative Eóin Tennyson participated in a rally at Belfast City Hall as part of a global day of action.

Alliance Councillor Eóin Tennyson has expressed disappointment after his call to divest the Local Government Pension Scheme from fossil fuels was defeated by the DUP and Ulster Unionist Party.

He was speaking following a vote on his proposal to write to NILGOSC, who manage the Local Government Pension Scheme, urging fossil fuel divestment was defeated to a meeting of Armagh City, Banbridge and Craigavon Borough Council’s Governance, Resources & Strategy Committee on Wednesday (11th November).

“This week, with the world’s eyes on Glasgow for COP26, I asked that Council play a small part by writing to the Communities Minister and to NILGOSC urging that the Local Government Pension Scheme be divested from the fossil fuel fuel industry.

“Councillors, past and present, are automatically enrolled in the scheme which continues to invest in climate-destroying fossil fuel companies and which therefore effectively helps to fund climate breakdown.

“Current trajectories mean by the time members of my age draw down our pensions, temperatures will already have soared above the 1.5 degrees envisaged by the Paris Climate Agreement and we’ll be contending with heatwaves and droughts of increased intensity and duration, rising sea levels, ice caps melting and ocean acidification.

“We can show leadership by taking our money out of the fossil fuels industry and instead ensuring it is invested for the public good, in the green technologies of the future. Many other Councils and organisations have already made similar calls.

“Yet, despite the platitudes from across the parties about the climate emergency this week, the DUP and Ulster Unionist Party voted down my proposal.

“The climate and ecological crisis is of great concern to citizens in our borough, particularly our young people, and they are demanding action now. It is a shame that the DUP and UUP refuse to heed their concerns.”