"The Boys' Brigade is my life"

Gladys Kerr speaks to Your Lurgan after being named on the Queen's New Year's Honours List. 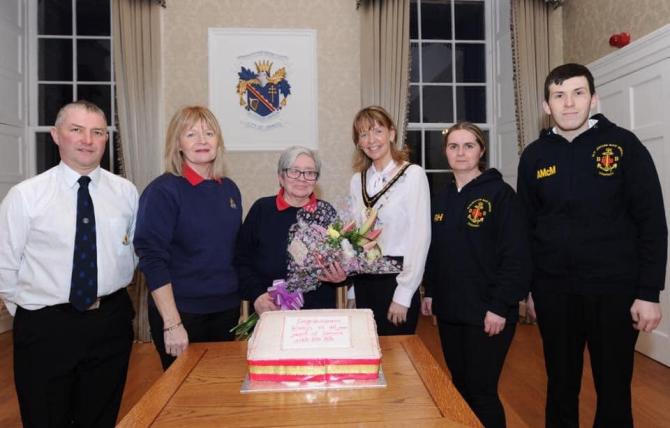 A Craigavon woman has spoken of her pride at being listed on the Queen’s New Year’s Honours List.

Gladys Kerr will receive a British Empire Medal (BEM) for her services to the Boys’ Brigade in Craigavon.

It marks a fitting tribute to her ongoing 54-year service to the BB after starting at Edenderry, before moving to Craigavon and then onto 1st Bluestone where she remains today.

Speaking to Your Lurgan, Gladys, who also volunteered for the Hospital Radio at Craigavon Area for over 30 years, thought that the letter outlining the news was “a scam”.

“I was completely shocked when I got the letter and read that I was receiving a BEM,” she said.

“I was sure it was a scam but thankfully it wasn’t and I still have the envelope with the news.

“I didn’t have an inkling that this was happening and I don’t know who nominated me, but I am extremely thankful and proud.

“The BB Captain, George McMurray, was contacted about the award but it wasn’t him who initially nominated me.

“It was difficult not being able to share the news for a few weeks, but in the past, people have had to keep it a secret for far longer, so I can’t complain.”

Gladys was thankful of the messages of support – even though her phone was active into the early hours of New Year’s Day.

“I thought that the news would be released in the morning of New Year’s Day,” she added.

“However, I received the first message of congratulations at 11pm on New Year’s Eve and I was up until 2am.

“The messages have been fantastic and I am thankful to everyone who has been in touch.

“I don’t think I’ve been on my phone as much in my life but it’s been great to hear from people who have been involved in the Boys’ Brigade or those who I worked with in the council.

“I am very thankful for the support from my family and George McMurray as they have been brilliant."

Despite the ongoing implications of the COVID-19 pandemic, Gladys insists she has no intentions of leaving 1st Bluestone, where she is leader of the Anchor Boys and helps out with the Junior section.

“The Anchor Boys and Junior section are back after COVID which is great to see,” she continued.

“Due to my age and health, I have been preparing and working hard at home behind the scenes.

“I haven’t left and I’m still there as the Boys’ Brigade is my life.

“I started the Girls’ Brigade at the age of three and completed the Duke of Edinburgh Award in 1967 before volunteering at the BB.

“I have seen plenty of generations coming through and I always have a laugh when I’m asked “was my daddy good or bad?”

“I think when the boys I first encountered start having grandchildren, then that will be the time to leave.”

So when will Gladys receive her award?

“No date was given but all I know is that I’ll be attending a garden party in the near future,” she confirmed.

“With COVID and everything else, I’m sure it will be arranged when it’s safe to do so.

“I’m just extremely proud and I’m thankful to the person who put me forward.”