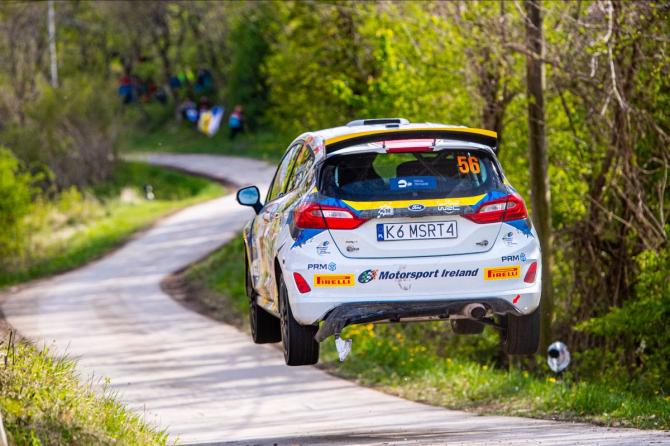 Creighton, 24 from Moira, headed to the unforgiving asphalt event, fresh from a maiden Junior WRC podium at Rally Sweden and was aiming to capitalise on an impressive start to his 2022 campaign. However, Creighton and co-driver Liam Regan suffered a tough weekend, salvaging fifth place in the hotly contested championship.

Just shy of 300km of special stages were in-store and would offer one of the most challenging sealed surface events of the season. But significant rainfall covered the region during the three days of competition, adding another dimension to proceedings and Creighton would have to dig deep to repeat his opening round glory.

The weekend started well for the rapid youngster, second fastest over the event’s pre-rally Shakedown stage highlighted his previous Croatia experience as a useful marker. But that Thursday run was undertaken in dry conditions and overnight, the entire look and feel of the rally had turned upside down with the arrival of rain-soaked, and mud strewn stages.

Those conditions would catch Creighton out on only the second stage of the event.

“I just simply ran wide at the exit of a corner and clipped a curb with the right rear wheel, but it was enough to damage the suspension and our day was done before we even got started,” said Creighton.

“The conditions were so tricky today but it’s the same for everyone. I just got caught out really. I`m really sorry to everyone for my mistake.”

The M-Sport Poland squad repaired the Fiesta overnight and Creighton was able to re-start under SuperRally the following day. Slightly drier conditions would offer some comfort, but his Croatian plight continued with a gamble on tyre choice – that didn’t pay off. He opted for four slicks and two wets, which, by the time the stages ran in the changeable conditions, was the opposite of what was required on the brutal stages.

Added to his plight, an electrical issue meant the car was cutting out, but Creighton persevered to nurse it to the end of the leg.

Sunday was a short sharp blast to the finish and finally saw Creighton back in the game. Fastest time over the 19th stage of the event, also saw him set a top 12 time overall in the rally, beating more powerful Rally2 machinery in the process.

But his cruel luck returned and a puncture on the final stage of the event summed up Creighton’s weekend.

“It’s been a very difficult rally on so many counts to be honest but ultimately it was my mistake on Friday which probably set off the chain of events,” he remarked honestly.

“You can never underestimate getting experience like this as it only makes you stronger for the future and of course, you have to also look at the positives during the course of a weekend. Our pace was good when everything clicked but we just couldn’t quite join the dots this time around. Our focus must now shift to gravel and Rally Portugal as that comes up in just three weeks time and I`ll be working flat out with the Motorsport Ireland Rally Academy squad to ensure I can hit the ground running.”