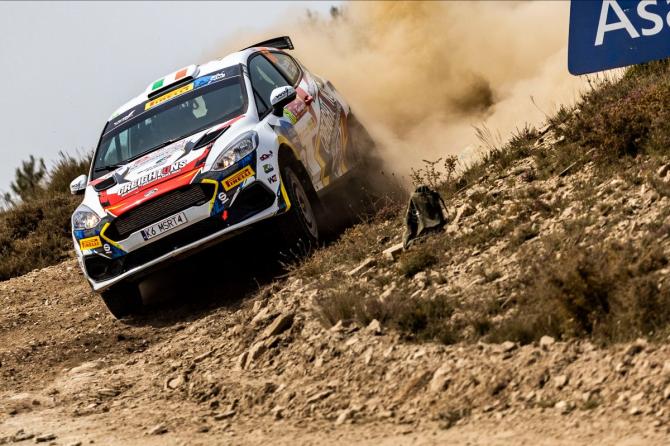 Motorsport Ireland Rally Academy driver William Creighton endured one of the toughest events of his career, as he was forced to retire from the third round of the FIA Junior World Rally Championship, Rally de Portugal [19-22 May].

Creighton, 24 from Moira in Co. Down suffered an unfortunate run of misfortune throughout the rally which included an opening leg retirement due to an accumulation of punctures and a final day impact which forced him and co-driver Liam Regan out of the rally with two stages remaining.

The rapid youngster would head to Portugal seeking a positive run after a third place at Rally Sweden and fifth in Croatia so far this season in the Junior WRC title chase. Having contested the event in 2021, Creighton was well prepared for the daunting conditions, with large ruts and sizeable rocks a well-known hazard on the rough gravel tests.

The opening leg of the rally was arguably the toughest thanks to eight stages and no service to rectify any issues. Management of the conditions and the pace would be required, and Creighton enjoyed a positive start to his event, settling comfortably into third place after the first three stages of the day.

Sadly, Creighton’s M-Sport Ford Fiesta Rally3 endured a total of three punctures in the following stages thanks to the rough Portugal gravel. Only able to carry two spares, he was forced to pull over before completing the day.

Able to re-start under Super Rally on Saturday, Creighton aimed to balance speed with the desire to emerge unscathed and despite yet another puncture during the day, the fastest time over the Amarante test showed his hand in the afternoon and he would hold the fifth spot heading into the final leg.

Sunday brought changeable weather however and the rain descended on the stages. Creighton was comfortable in the conditions, setting impressive stage times before disaster struck on the nineteenth stage when the Fiesta ran wide on some slippery asphalt, clipping the outside of a corner and breaking the rear suspension, putting him out of the rally instantly.

“I am really annoyed to throw a vital eleven points away with a silly mistake,” said an honest Creighton.

“It has been a tricky rally, which we knew it would be. The stages on Friday were much rougher than last year and that was probably because of the dry weather and so with the four punctures we had on Friday, I was happy to be in a position on Sunday to be scoring some decent points. I`ll hold my hands up completely, it was my fault.”

“Overall, the pace on the rally was positive, especially on Saturday afternoon and it is nice to know that over a stage that is as long as Amarante [37 kilometres] we can be setting fastest times. The second pass was looking good too before yet another puncture.”

“We have a break before Estonia in July so I`ll certainly be using that time to re-set and focus on the rally and the remainder of the season. I`ll continue to work hard with the Motorsport Ireland Rally Academy and be as prepared as possible to get some good results for myself and everyone who is supporting us.”