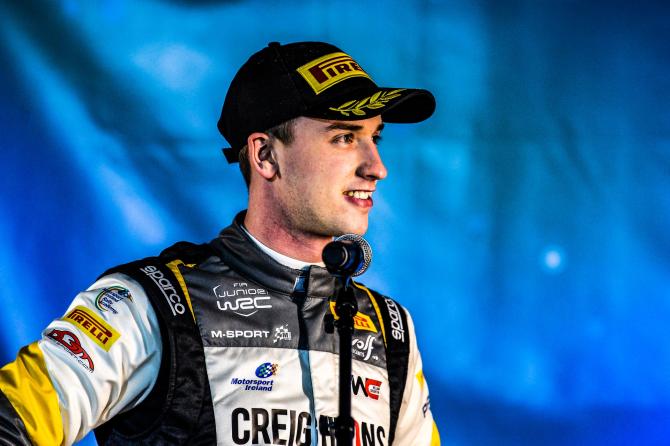 Creighton, 24 from Moira, battled with unpredictable and treacherous conditions on the high-speed gravel tests to take valuable points in his Junior WRC bid, staying out of trouble to head into the final, double points scoring round at Acropolis Rally Greece in fifth place in the standings.

In his second season tackling the Junior WRC, Creighton and co-driver Liam Regan have endured a roller coaster of a year after progressing into the M-Sport Ford Fiesta Rally3 from the Rally4 sibling in 2022. Adapting to four-wheel drive and a new challenge, Creighton has shown flashes of brilliance with fastest stage times and a third place at Rally Sweden a highlight so far.

But a troublesome Rally de Portugal netted him a zero score and he would be eager to get back into the grove on the penultimate round of the season at Rally Estonia. The ultra-high speed gravel roads in the Baltic region would set to test the world’s best rally drivers and with the addition of unpredictable weather to add into the mix, it would arguably be a rally of survival rather than outright speed.

After the Super Special on Thursday evening, Friday’s tests would be the driest of the rally although that was little comfort to Creighton who would be dealing with the deep ruts and changeable grip levels. And he would profess to be “happy” with his approach to the longest leg of the event although admittedly a little off the pace of the leaders, dropping from fourth in the morning to fifth by the end of the opening day.

Saturday was shorter but no less difficult as the soft Estonian roads meant there would be little margin for error. A spin early in the day dropped Creighton some time but a steering issue would hamper any chance of fighting for top times, the Fiesta pulling to the side under braking.

The deep ruts would get no better on the final day with Creighton almost rolling on the opening stage of Sunday and with just a few stages to go, he elected to consolidate his position rather than try and challenge the leaders, securing fifth place in the Junior category.

“It’s really been a rally of balancing my pace with the conditions but also being mindful of making it to the finish after our Portugal zero score,” said Creighton.

“I guess on paper that has meant we didn’t look like we had the pace to challenge for the front but I was really happy with my approach and the pace I did have at times. The Junior WRC is so closely matched, if you are just a couple of seconds shy of the front it can mean you still only get a fourth or fifth fastest time and that’s about where we were this weekend.”

Creighton is eager to look at the positives ahead of the season climax in Greece in September.

“If I compare my speed to this event last year, it's hugely improved so there is plenty to take away from it. I`m aware there is some work to do though and I`ll continue to work hard with the Motorsport Ireland Rally Academy to see if we can get closer to the front. It doesn’t get more challenging than the Acropolis so I`ll be knuckling down to be able to hit the ground running for the final round, and with double points on offer, anything can happen championship wise.”