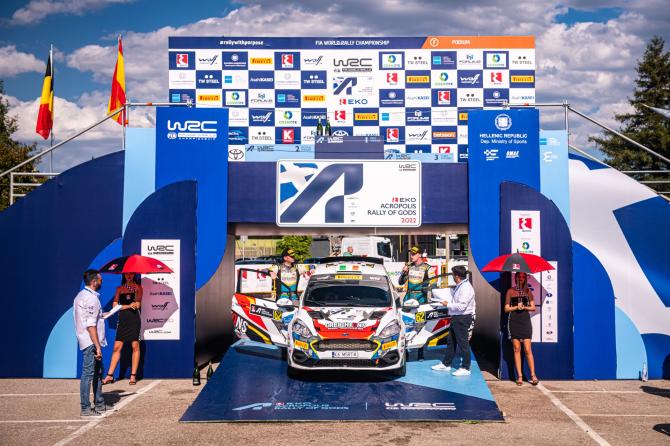 Motorsport Ireland Rally Academy driver William Creighton stood on the FIA Junior World Rally Championship podium for a second time in 2022, after claiming third place at an unforgiving EKO Acropolis Rally Greece [8-11 September], the final round of the season.

Creighton, 24 from Moira, overcame an early puncture and a time-zapping hub issue on his Ford Fiesta Rally3, to round out his Junior WRC campaign with a place on the rostrum, adding to his Rally Sweden third place in February.

After four, gruelling days on some of the most difficult gravel roads in the world, Creighton was able to celebrate back in Lamia with a string of top two times under his belt and an impressive show of pace, an encouraging way to end his second season in one of the most hotly contested rally series in the world.

“That was probably the toughest rally I have ever done,” said Creighton at the finish.

“It’s such an iconic event and one which I have been really looking forward to, so it wasn’t really a surprise to see how rough and tricky the roads were going to be, especially running quite far down the order. But adding into that the searing temperatures, made it so very exhausting too. “

“We drove with our heads all rally long and resisted the temptation to go flat out. It was a tactical drive, especially on Friday with no service during the day and in a way, it felt odd to have such a controlled pace, but I`m glad it worked out in the end. To come away with third on an event like the Acropolis is certainly a huge achievement and I can’t thank Liam [Regan, co-driver] enough for his support at the weekend and all season long.”

After a strong showing on his debut season in the Junior WRC, Creighton returned in 2022 as the series made the switch to the four-wheel-drive Fiesta Rally3 from M-Sport Poland. And he has endured a rollercoaster of a season, mixing rally-winning pace with misfortune and technical issues.

That Rally Sweden podium kicked his campaign off perfectly, but fifth place in Croatia was all he could salvage after damaging the suspension. A cruel Rally Portugal saw him park up on the final day of the event with a zero score and a tough Rally Estonia delivered another fifth spot.

Sitting fifth in the championship, Creighton would be just shy of entering the final round to fight for the title but was eager to end the season on a high. After a difficult campaign, third place to round out his assault was a positive end to Creighton's efforts.

“There have been several things that just haven’t gone our way this season and with only five rounds in the championship, it offers little margin for error. But there are so many positives to take away from the year and I know I have the pace to challenge at the front so that is encouraging for the future."

"I`m indebted to the Motorsport Ireland Rally Academy for all their valuable help, support, and guidance this year and of course to M-Sport, DGM Sport and all my backers for enabling us to complete the season. Congratulations to Brian [Hoy] for taking the co-drivers title and Jon [Armstrong] for putting up such a great fight for the championship, it’s been great to compete alongside them once again. It’s now time to sit back and look at the next steps and see what our next move is.”