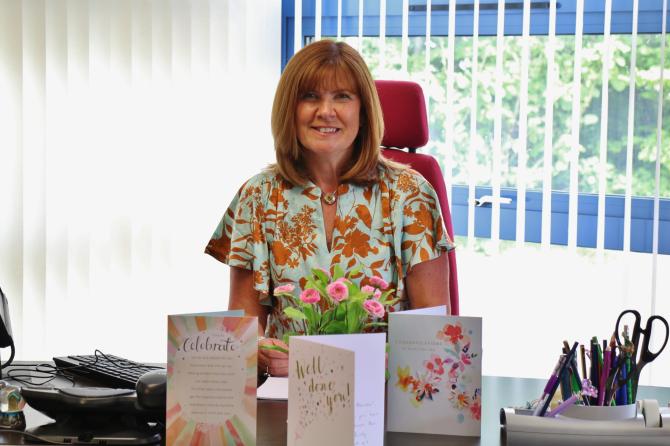 The former vice-principal of Donacloney Primary School says she is "honoured and humbled" to have been awarded an MBE in the Queen's Birthday Honours List.

Rhonda Moles, who went on to be the principal of schools in Belfast and Co. Down, has been recognised for services to education.

Explaining her motivation for her nearly 20 years as a principal, she said: "I want every child to learn, to be active in their learning, to be happy, to achieve their full potential and to take the next step in education with confidence."

Later she would go to Stranmillis College, graduating in 1989 with a 2:1 Bachelor of Education Honours Degree, followed by a Masters in Education with distinction in 1998.

She then began a teaching career which has ran for 32 years. She started at Kilmalne Primary School in Bangor before moving in 1993 to Strandtown Primary in Belfast.

Cumran PS in Clough was to be her new school, and she has remained there ever since.

She now lives in Waringstown with her husband Adrian, and sons, 16-year-old Joshua, and Lukas (15).

"They are delighted for me and so proud," added Mrs Moles.

"I am very honoured and humbled to receive this MBE. I am delighted and it was totally unexpected!"

She said she has been “privileged to work, and have an impact, within the wider education system at different levels for many years”.

Mrs Moles explained: "I have had many opportunities to share my experience with other educationalists. I have spoken at numerous conferences in Northern Ireland, to others in the field of education, sharing my experiences of leadership in driving the school forward in areas such as ICT, Assessment and Data Analysis, Growth Mindset, Thinking Skills and Personal Capabilities.

"I have also presented at the Bett Conference in London, an International Conference, to educationalists from all over the world in how to lead a school to the forefront of technology and strive to always provide children with the opportunities that prepare them to take their place in the 21st Century."

Mrs Moles said she is inspired by the words of American philosopher Ralph Waldo Emerson: “Do not go where the path may lead, go instead where there is no path and leave atrail.”

She added: “Throughout my career I have always been guided by this quote. I always make decisions based on what is best for our children, rather than following others and the path well-trod.

"I am prepared to take calculated risks, to think outside the box, to be creative and have the courage to lead where I think is best for the children.

"I was delighted to lead my current school, Cumran Primary, through two Outstanding Inspections.

"I want to thank the great team of staff that is with me and who walk the path beside me each day. I could not do it without them. I also value the support from the Board of Governors and parents.

"When I receive the award at Buckingham Palace I will be accepting it on behalf of the Cumran Community.

"Equally I could not do my job without the support of my family so it is fitting that they will also attend the ceremony in London."