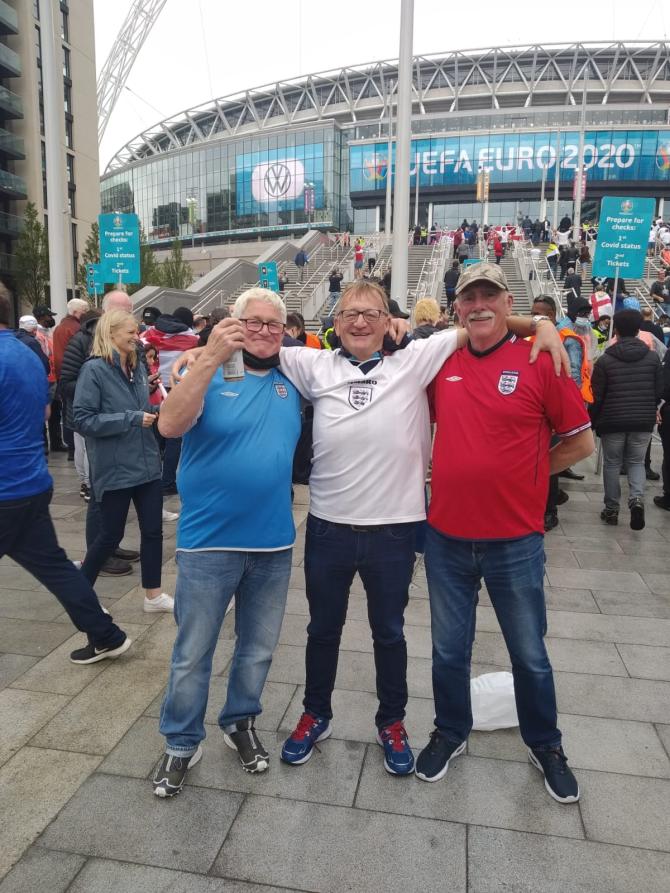 From left, Davy Guisely, Glenn Stewart and Kenny McCleary with Wembley Stadium in the background.

Three Lurgan men were amongst the 40,000 who witnessed England see off their old rivals Germany at Euro 2020 at Wembley yesterday.

Glenavon fans Glenn Stewart, Kenny McCleary and Davy Guisely – who is a bone fide England fan – were cheering on the Three Lions, who progressed to the quarter-finals of the stadium thanks to goals from Raheem Sterling and Harry Kane.

It sets them up for a big Saturday night clash with Ukraine, who progressed last night thanks to a late extra time goal in their last 16 game against Sweden from Oleksandr Zinchenko.

The three lads, who are members of the Victoria Glenavon Supporters Club, had got tickets by pure chance.

Kenny explained: “Another one of our members, John Stewart, had managed to get tickets for the game, which was due to be played at the Aviva in Dublin originally.

“But when it was announced that the games couldn't be played in Dublin any more, we had our money refunded.

“In the meantime, anyone who had got a ticket for Dublin was given first preference for a ticket for the game at Wembley, and it just worked out that it was England against Germany.”

Members of the Victoria club are known for being fond of a big-game atmosphere, so the trio felt right at home on Wembley Way.

“There were thousands out on the streets singing,” added Kenny.

“The stadium was only half full, you could have sat down anywhere near where your seat was. We even had German fans sitting beside us – it was all good craic.

“When we came out afterwards the England fans didn't stop. They were going daft, even after we went home they were still going.

“I couldn't believe the number of people out on the streets singing and drinking – there was nobody in the pubs!”

Glenn said it brought back memories of the last Euros held five years ago in France.

“I was there in 2016 and it just reminded me of how the Northern Ireland fans got on over there. It was brilliant,” he said, who has had a few friendly digs sent in his direction after being pictured in an England top.

“I was going to wear my Northern Ireland top but Davy warned me not to!” he joked.

“England did what they had to do to win. That's how he's setting the team up – not to attack, but to win the game.

“They'll stop the other team from scoring and they have good forwards who will get you a goal, which they have done.

“They've a good chance to get to the semi-finals anyway.”

So is football coming home?

“Northern Ireland beat Ukraine at the last Euros, so you'd imagine England should beat them.

“Whether they'd win the whole lot you just wouldn't know.”