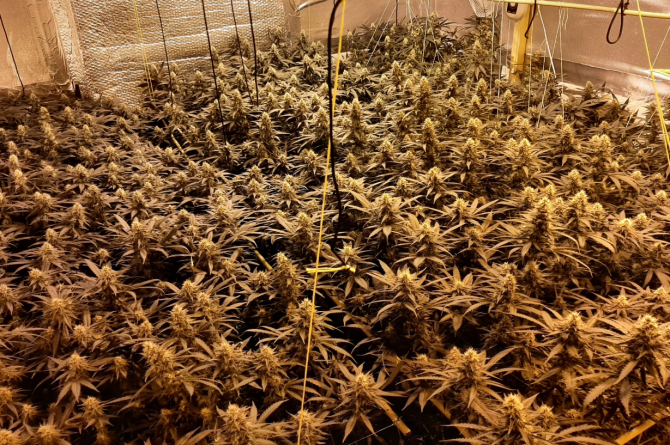 Police who thought they were attending a domestic incident after being alerted by a concerned member of the public uncovered a “very professional” cannabis factory in a house in Lurgan.

Two people appeared at Lisburn Magistrates' Court charged with a range of drugs offences following the discovery on the Gilford Road on Friday night.

He is further charged with criminal damage and dishonestly using electricity.

Twenty-one-year-old Nicole Wolska, of Gilford Road in Lurgan, is also accused of cultivating cannabis, being concerned in the supply of cannabis, and possessing cannabis with intent to supply.

She too is charged with criminal damage and dishonestly using electricity.

A police constable aware of the facts explained that before 11pm on Friday evening police received a report of a disturbance on the Gilford Road. A distressed female was outside the address.

“Upon arrival Miss Wolska was found outside the property in an obvious state of undress and intoxication. She was basically in her underpants,” said the constable.

“Mr Jakusz was also found at the property. Police separated both parties believing it was simply a domestic incident.

“Police entered the property with Miss Wolska in order to get her a robe or clothing of some fashion. Whilst in the house police observed what can only be described as a mini-greenhouse in the living room which contained seedlings for cannabis.

“The entire upstairs of the property had been converted into a cannabis factory. Two bedrooms had been completed with lighting, heating, insulation, ventilation – it was such a professional operation that the police downstairs couldn't even smell it.

“The third bedroom was in the process of being converted.”

During interview, the officer added, Jakusz made full admissions, stating that he arrived in Northern Ireland in April and had attempted to seek employment as an electrician but his qualifications from Poland didn't qualify him to the same degree.

It was this that caused him to start a cannabis factory in the property, which he was renting.

The court heard that he was “redirecting the mains electric to power it and knocking various holes in the house to fit the ventilation and the electrics”.

The officer said that it was “a very professional job”.

“Her involvement is basically just assisting him in the tending of these plants, but also in the partial conversion of the third room which in progress,” added the officer.

Outlining their objections to bail, the officer said that the estimated value of the plants was around £80,000.

“Other than this address, neither of the defendants would have a suitable address.

“Even though police are currently in possession of their passports, we would think of them of a high flight risk, given the value.

“They've been in Northern Ireland for a very short time. [Jakusz] had been here for three weeks when he decided to begin this activity.

“Neither party had been in Northern Ireland before so they have no criminal history here. We have put in requests to Polish police but we haven't had replies yet from that, so we are unaware of any international offending.”

A defence solicitor for Wolska said there was a distinction which had been drawn between both defendants.

“The officer has been very fair with his outline,” he said.

“It's clear from the outset that admissions have been made by both parties, the bulk of the admissions being made by Miss Wolska's co-accused.

“The application for bail is for her to be released to an address approved by the police. I don't take issue with anything the officer has said – the officer's objections are well founded, but in the circumstances we would say that Miss Wolska could be released on bail subject to a suitable bail package being put in place.”

The solicitor added that Wolska had worked as a waitress in Poland and had been in a relationship with her partner for three years.

“There doesn't appear, on her instructions, to have been any issue between them before and whatever has transpired at the weekend [has caused] a neighbour to phone the police.”

A solicitor for Jakusz said that his client had a successful business in Poland which employed 8-10 people.

“The business went into difficulties due to Covid. There is no business relief scheme in Poland, I am instructed. It went bust and he came to Northern Ireland for a fresh start.

“The Police have his passport. I accept that in terms of crossing the border that is a possibility but in reality he is a man of no means. I'm not sure that suggestion gets off the ground.

“It seems to me that he simply can not get to Poland and, from my instructions, there is nothing for him in Poland. He came to Northern Ireland to try and get away from his difficult business past.

“This gentleman has not tried to dodge the questions from police. He has answered all the questions put to him by police. There have been full admissions which has made the police's job, in terms of the prosecution, a lot easier.

“I would ask that if bail was to be approved it would be to an address approved by police in due course, so he would not be released immediately.”

“In my view this was a highly professional operation,” said the judge.

“This is a man who owes substantial amounts of money with no means of repaying it. The way he went about getting himself back into business was to set up a professional drug operation.

“In my view there is a risk that he will do something similar, given the opportunity. There is also the risk of flight across the border, and he has no address at present anyway.”

The judge added that Wolska was of a “completely different category”.

“She is on the edge of this case. She is not the major mover. She was an assistant at it's height.

“She has no previous convictions as far as well can find out and I do propose to grant her bail to an address approved by police, if that can be found.”

Bail was set at £300, she has to surrender her passport to police and she has to sign at an agreed police station three times address once an address is found as part of her conditions.

Both defendants' cases will be heard again on August 23.